People have been talking about dementia and Alzheimer's disease (AD) for over 100 years now. Yet, in most cases, the difference between them is not clear. Is there a real difference?

The answer is that AD is just one of the types of dementia, albeit the most common type by far, making up 60 to 80 percent of cases. Dementia refers to a progressive loss of cognitive abilities or a permanent decline in mental function. Dementia is characterized by chronic memory loss, a change in personality, and loss of reasoning and logic. While forgetfulness is often experienced, especially by busy or rushed older people, it is not called dementia unless it is so severe that it disrupts daily living. 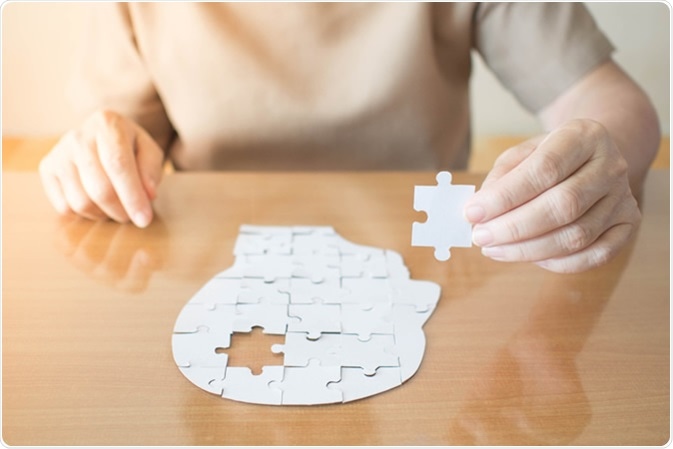 Dementia is caused by many conditions other than AD, the second most common cause being vascular dementia. In this case, the brain is slowly destroyed by blood pumping through the arteries at increased pressure, damaging the arterial walls. In many cases, vascular dementia follows the occurrence of a stroke or a series of strokes. The risk factors for vascular dementia include high blood pressure, diabetes, high blood cholesterol, and atrial fibrillation, all of which also increase the risk of stroke.

Some other causes of dementia include:

Sometimes the person just has forgetfulness due to old age, but this is not the same as dementia or AD.

AD is a condition in which the cognitive skills are slowly but irreversibly eaten away. The affected person finally becomes unable to do even simple things and requires total care. It is the sixth leading cause of death in the US, and death usually occurs about eight years, on average, after it becomes symptomatic.

To diagnose AD, two or three areas of cognition must be obviously abnormal, such as memory, language, disorganization, and disorientation.

The brain in such individuals shows characteristic plaques of a protein called beta-amyloid, and tangles of a neurofibrillary protein called tau. A new method of imaging the living brain by PET scanning with an amyloid-binding tracer helps detect these abnormalities in the brain and diagnose AD more accurately. However, it is only a little more accurate than the traditional clinical method of diagnosis and is reserved for patients who have atypical AD.

Why is the difference between AD and other dementias important?

Different remedies are required for different conditions. Patients with some types of dementia other than AD might need antidepressants and various types of support and medication. People with AD might get medications to improve cognitive performance, on the other hand.

More importantly, AD can be partially prevented. By being careful about the seven main risk factors for AD, other than genetics and age, at least a third of AD can potentially be prevented.

The seven preventable risk factors include:

Exercising stimulates better blood flow and also helps increase connections between the brain cells. Mental exercise, such as learning a new game or language, playing chess, or reading new books, also helps the brain improve its performance and may slow the onset of age-related dementia. And a healthy diet is key to overall good health.

The latest advice would, therefore, be to pursue a healthy eating pattern, take regular adequate exercise, and exercise the brain as well in an enjoyable way. Doing as much as possible to enrich life is essential to remaining well, rather than focusing on one area alone.