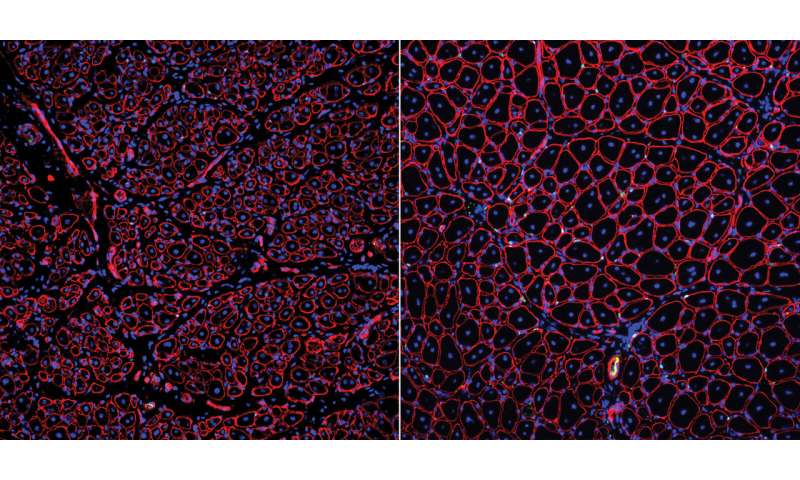 An age-related decline in recovery from muscle injury can be traced to a protein that suppresses the special ability of muscle stem cells to build new muscles, according to work from a team of current and former Carnegie biologists led by Chen-Ming Fan and published in Nature Metabolism.

Skeletal muscles have a tremendous capacity to make new muscles from special muscle stem cells. These “blank” cells are not only good at making muscles but also at generating more of themselves, a process called self-renewal. But their amazing abilities diminish with age, resulting in poorer muscle regeneration from muscle trauma.

The research team—including Carnegie’s Liangji Li, Michelle Rozo, Sibiao Yue, Xiaobin Zheng, and Frederick Tan, as well as Christoph Lepper formerly of Carnegie now at the Ohio State University—figured out that a protein called GAS1 is the culprit for this age-related decline.

“Encoded by the growth-arrest specific gene, the GAS1 protein lives up to its name, accelerating the functional decline of muscle stem cells,” explained lead author Li.

They also discovered that GAS1 inhibits another protein, a cell-surface receptor called RET, which they showed to be necessary for muscle stem cell renewal. The more GAS1 protein is present, the more RET’s function is reduced.

The inhibition of RET by GAS1 could be reversed by the third protein called GDNF, which binds to and activates RET. Indeed, when the researchers injected GDNF directly into the muscles of aged mice, muscle stem cell function and muscle regeneration were restored.