Passive smoking, also called second-hand smoking (SHS), is the term for inhaling the sidestream smoke emitted from the end of a lighted cigarette along with the smoke exhaled by the smoker in proximity. This smoke contains more than 7,000 noxious chemicals, of which at least 70 are carcinogenic. 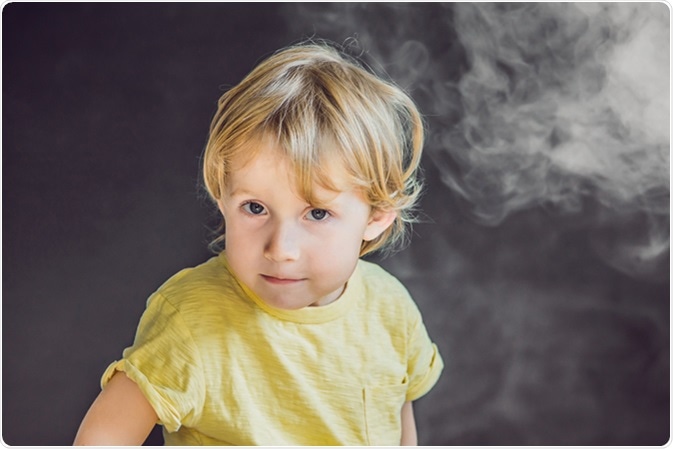 Sidestream smoke contains 10 times higher amount of toxins than mainstream smoke. On an estimate, children whose parents smoke are exposed to as much nicotine as if they themselves had smoked 60-150 cigarettes a year.

About 85% of the sidestream smoke from a cigarette is inhaled as second-hand smoke (SHS). The alarming thing about SHS exposure is that it causes 600,000 early deaths each year, and there is no level of safe SHS exposure whatsoever.

The number of health problems caused by SHS in children is large, and includes:

The severity and frequency of childhood infections such as respiratory infections (pneumonia and bronchitis) goes up to 60%, probably because SHS irritates and inflames the airways, and impairs the functions of the immune cells within the lungs.
The risk of respiratory illness increases by 60-70% if one or both of the parents smoke, and by 30% if any other family member smokes.

An asthmatic child is at 20% higher risk of acute exacerbations, and has more frequent and severe attacks, requiring more visits to the ER and increased use of medication, as well as increased need for intubation, if one or both parents smoke.

About 21% of asthmatic children between 5 and 7 years of age have at least one smoking parent, and especially the smoking mother.

The risk of recurrent ear infections (otitis media) goes up by 50% perhaps because SHS leads to dysfunction of the Eustachian tube via paralysis of the cilia, leading to lowered mucociliary clearance, increased mucosal swelling, and hyperplasia of the adenoids, all of which predispose to infections of the upper respiratory tract.

Impaired lung functioning occurs because of repeated respiratory infections in childhood, and possible in utero exposure to SHS.

In children whose fathers smoked, there is an increased risk of

This refers to the sudden unexpected death of an infant during the first year of life for no apparent reason. Its incidence is 94% higher in children whose parents smoke.

More than 1,000 infants die every year because of maternal smoking during pregnancy.

The effect of SHS on the child depends upon