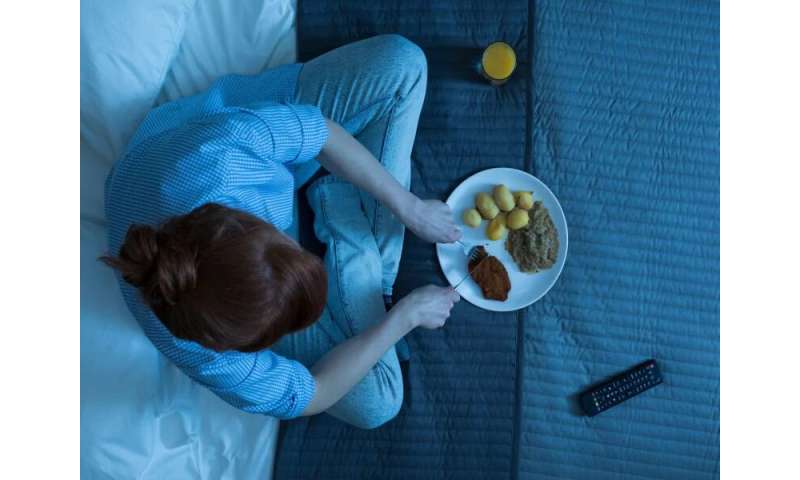 (HealthDay)—Late dinners and heavy evening snacking do no favors for women’s hearts, a new study suggests.

Researchers at New York City’s Columbia University found that those who ate more of their daily calories in the evening had a higher risk of heart disease.

One cardiologist who looked over the new findings wasn’t surprised by the effect.

“Not only are our bodies not meant to digest at late hours, we are also less mobile at night, thus the calories we consume are not being expended as energy,” said Grayver, who directs the coronary care unit at North Shore University Hospital in Manhasset, N.Y.

Most of the women ate some food after 6 p.m., but those who consumed a higher proportion of their daily calories in the evening tended to have had poorer heart health, say a team led by Nour Makarem, a Columbia associate research scientist.

In fact, with every 1% increase in calories consumed after 6 p.m., heart health declined accordingly.

Specifically, women who ate more of their daily calories in the evening were more likely to have higher blood pressure, higher body mass index and poorer long-term control of blood sugar.

Similar findings occurred with every 1% increase in daily calories consumed after 8 p.m., according to the study, which is to be presented at the American Heart Association’s annual meeting, held Nov 16 to 18 in Philadelphia.

“So far, lifestyle approaches to prevent heart disease have focused on what we eat and how much we eat,” Makarem said in an AHA news release. But he said that the when of eating may be important, too.

There’s good news from the study, because shifting the timing of eating is “a simple, modifiable behavior that can help lower heart disease risk,” Makarem said.

Dr. Satjit Bhusri is a cardiologist at Lenox Hill Hospital in New York City. He agreed the findings make sense.

“Calories are immediate energy,” he said. “I always advise patients to eat a lean, low -carbohydrate, early dinner. This simple understanding and mindfulness of when and what to eat, as the study states, can make a major impact on overall cardiovascular health and outcomes.”