A water birth refers to the delivery of a baby underwater to a laboring woman whose lower body is immersed in a bath or tub of warm water. This has been controversial among the medical establishment in the USA, while in many European countries it has become more accepted.

A review of the evidence shows that there is no reason to think that it induces harm to the mother or fetus, and it has many positive aspects. 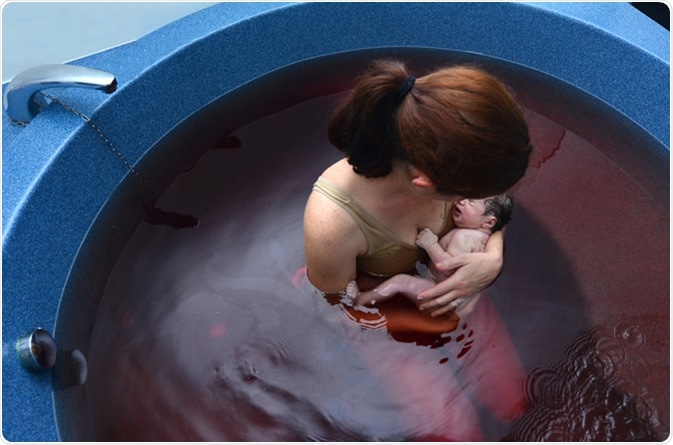 Evidence for a Lower Mean Duration of Labor

Statistical evidence is in favor of water birth as relates to a shorter mean duration of labor with greater maternal relaxation. This is mostly due to a reduction in the duration of the second stage of labor.

It is noticeable that while more mothers reported intense pain during the second stage of labor, a significantly increased percentage reported satisfaction with their birth experience and relaxation during the labor, as well as a significant reduction in the perception of pain when looking back on it.

The need for pain medication throughout labor and delivery has been found  lower compared to normal land births.

This has important benefits for the baby, who is able to have normal exposure to the natural levels of oxytocin, catecholamines, and endorphins that characterize the physiology of a laboring woman.

These are crucial in ensuring that the baby is calm, alert, and able to exercise the reflexes that prepare it for the all-important transition from life in the intrauterine environment to life outside.

Almost 3 out of 4 women reported a high level of satisfaction with the labor and birth experience.

The mother finds it easy to balance her weight in the water, to stay upright during labor and delivery, and no forcible manual intervention is carried out until the baby is fully born.

The perineum is therefore much more likely to be intact, and the birth to be slower and more controlled.

Evidence shows that there is a higher incidence of 1st and 2nd degree tears, as would of course be expected from the lower incidence of routine episiotomies in water birth. At the same time, the number of severe perineal lacerations is extremely comparable, and less than that which would be expected when a stool is used for delivery.

Several studies showed that water birth was associated with a lower mean blood loss during and following delivery, as well as a higher mean maternal hemoglobin level in the postpartum period.

Many obstetricians fear that a baby born underwater will inhale water during its first breath. However, the physiological processes that underlie birth ensure that the baby does not take a breath while it is submerged.

There are several triggers for breathing, which include gravitational pressure on the face, and chemoreceptors that sense the presence of oxygen and carbon dioxide. These trigger the change from fetal to newborn circulation and stimulate breathing.

A mild physiological hypoxia is present which prevents premature breathing while under water. During this time an important event occurs, namely, the swallowing of the contents of the mouth. This accomplishes the clearing of the airway, and the introduction of regulated foreign matter into the fetal intestines in the form of vaginal and amniotic fluid, and other sources of benign bacteria. These enter the gut and begin to colonize it, building neonatal immunity and helping helpful species to establish their hold. Thus breathing almost always occurs only after this initial swallowing act, often followed by a spit or a sneeze.

Immediate suctioning of the mouth only disturbs this process rather than helping normal breathing to set in.

Water aspiration was reported in a very few cases but only prior to 1999, and was associated with a complete recovery in almost all the cases. Overall, Apgar scores are higher at 5 minutes compared to babies born on land.

Skin-to-skin contact is almost uninterrupted following water birth, as the baby is allowed to be in the water for a few moments until the whole body is delivered, following which the infant is gently placed on the mother’s chest until the cord is cut.

This helps the baby make the transition from the intrauterine to the extrauterine environment without stress.

The absence of vigorous newborn cry has not been found to indicate any deficit in normal newborn breathing under these circumstances, but rather a quiet and alert baby who is observing the surroundings with a confident and stable state of mind.

Infants born in the water tub regulate their temperature well because of the immediate and continued skin-to-skin contact with the mother, along with the improved capillary filling due to the delayed cord clamping. This means that radiant warming and warm clothing are not necessities in this setting.

No study has ever found any relation between water birth and increased neonatal ICU admission or neonatal infections.

In fact, the dilution factor reduces the risk of exposure to pathogenic bacteria. Water from the tub does not enter the vagina either, as has been proved. The only proviso is that all equipment used during this delivery should be disposable or sterilisable. The normal stringent infection control policies should be used to prevent infections, as always.

A confounding factor is that women are not allowed to labor in the water tub after the slightest irregularity appears in the fetal heart rate, unlike with normal labor on land. This will necessarily skew the results.