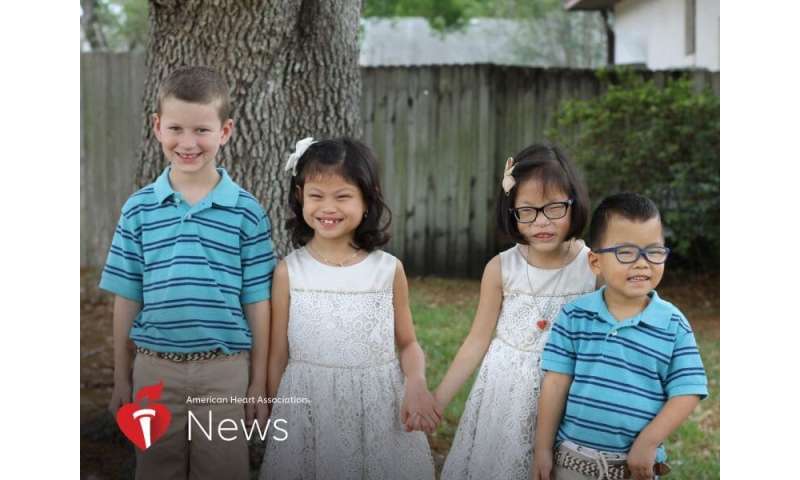 James and Tara Fussell were on a Caribbean cruise celebrating their 10th anniversary when they decided to give their son and two daughters another sibling.

The girls were adopted from China, and by the time the couple stepped off the ship, they already had the adoption file for the boy who would soon join their family.

While many American families adopt children from China, even multiple children, there’s more to the Fussell family. Each of the three children they adopted had a heart condition.

“These kids might have been born with a broken heart, but they are strong, and there’s a light in them,” Tara said.

James, a firefighter in Orlando, Fla., and Tara, a podiatrist, had discussed adoption long before they even married. They often browsed the profiles of children on waiting lists.

They’d been married for five years when their biological son, Jackson, arrived. Three years later, Tara saw online the profile of the girl who’d become their next child, Juliet.

Juliet was extremely thin and tired easily. The cause was a hole in the wall separating the two lower chambers of her heart, which is known as a ventricular septal defect. A pediatric cardiologist told them it could be surgically repaired. Within a month of Juliet’s arrival in the United States, it was.

“We had a boy and a girl 10 months apart in age who got along fantastically,” Tara said. “We thought we were done.”

This child was very weak, and her skin had a distinctly bluish tint. She had tetralogy of Fallot, which affects blood flow through the heart and to the lungs, causing oxygen-poor blood to be pumped to the body. Unlike Juliet’s condition, which proved relatively easy to correct, this condition would require multiple challenging operations.

Tara sent the girl’s file to James at work. He prayed about it all day. That night, he texted Tara: “What are we going to name her?”

“You could see the want in her eyes,” James said. “When I looked at her, I could tell that she needed to be part of our family.”

Over 18 months, Jade endured two open-heart surgeries and numerous cardiac catheterization procedures. While she’s doing much better and enjoys her kindergarten class, she struggles with speech and hearing. That hasn’t impacted her spirit.

“Jade wouldn’t let us put her down from the moment we picked her up,” James said. “She can meet anybody and immediately be their best friend.”

When James and Tara met Jett, they were struck by his small stature and distended belly. Those were the result of a swollen liver and spleen caused by a mutation of his red blood cells.

The condition also caused chronic anemia, which ultimately enlarged his heart. The file noted he would need regular blood transfusions. Then Tara saw Jett’s blood type: A positive. The entire family shares that, which she considered a sign that he was meant to join their family.

“I have given him blood, so I would say that we are blood-related,” Tara said.

As it turned out, Jett had hereditary spherocytosis, a double mutation in his red blood cell membranes that caused his spleen and heart to become enlarged. After removing Jett’s spleen and gall bladder, his jaundiced skin returned to normal almost immediately.

“If my kids had stayed in China, they might have died from something that’s very treatable or curable in the U.S.,” Tara said. “That blows my mind.”

Life is busy in the Fussell household. There’s always a test to be scheduled, doctors to be seen or school meetings to attend, but the children are happy and doing well.

The couple recently made a video for the American Heart Association’s Orlando Heart Ball, and they also have participated in a charity walk with the Little Hearts group.

James and Tara have not ruled out adopting another child. They continue to feel especially drawn to children with heart conditions.