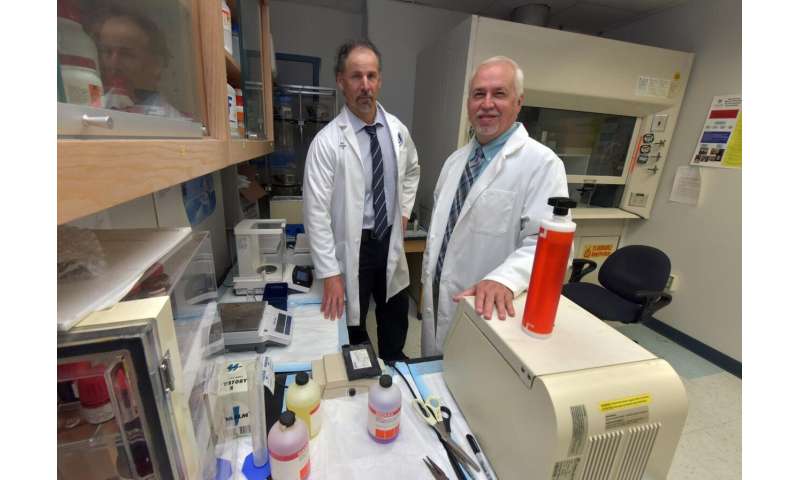 High glucose in obesity appears to gum up the works of the circadian clocks inside our cells that help regulate the timing of many body functions across the 24-hour day and drive the risk of cardiovascular disease, scientists say.

“We have demonstrated that glucose and cardiovascular problems are intrinsically linked in obesity,” says Dr. David Stepp, vascular biologist in the Vascular Biology Center and Leon Henri Charbonnier Endowed Chair in Physiology at the Medical College of Georgia at Augusta University.

“We have also demonstrated that high glucose impairs circadian clock function. Now we want to know if we fix the clock, do we fix the cardiovascular problems,” says Stepp.

He and Dr. David Fulton, director of the Vascular Biology Center and Regents professor in the MCG Department of Pharmacology and Toxicology, are principal investigators on a $2.7 million grant from the National Institutes of Health that is enabling the use of intermittent fasting and a developing category of clock repair drugs to find the answer.

“Every cell in your body has a clock in it that is used to anticipate daily needs,” says Fulton, your blood pressure and heart rate drop at nighttime and surge in the morning when your feet hit the ground and blood must fight against gravity.

The MCG scientists have evidence that obesity can break these links between metabolism and cardiovascular regulation. Excessive food consumption, particularly foods that are high in sugar and carbohydrates, some of which our body also breaks down into glucose, dampens clock function and imperils cardiovascular health. “It’s certainly an accelerant,” Fulton says of high glucose.

They have documented both high glucose levels and significant circadian dysfunction in a mouse model of hyperphagia. These obese mice have tremendous appetites, high glucose and high blood pressure that does not dip at night when it should, and most importantly, dysfunction of the single layer of endothelial cells that line blood vessels. Normally endothelial cells provide a smooth surface for blood to pass over and play a key role in enabling blood vessels to dilate in response to greater blood volume so blood pressure doesn’t increase too much.

Endothelial dysfunction, a focus of their cardiovascular studies, is a major initiator of atherosclerosis, and what many of us think of as heart disease. Dysfunctional endothelial cells become inflamed, sticky and produce more damaging reactive oxygen species and less nitric oxide, which impairs blood vessel dilation. The result can be a tortuous passageway for blood, sticky walls where cells pile up and coronary artery disease.

When the MCG scientists disrupt the gears of circadian clocks in mice using genetic approaches or environmental modifications, including jet lag light cycles, both approaches result in loss of clock function and increase the risk of endothelial dysfunction and disease. Now Fulton and Stepp want to know more about how the clocks lose timing and how best to intervene.

They have bred the obese mice with a clock reporter, a gear of the circadian clock linked to a fluorescent protein that lights up when the gear is turned, so they can better track clock activity.

Using these clock reporter mice, they saw huge downturns in circadian rhythms and clock-related genes in obese mice and high levels of glucose in the blood upstream of these events.

“The first thing we want to know is can we understand why the clock is rundown in obesity,” says Stepp. “The second thing is what mediates the effects of circadian disruption on cardiovascular disease, and if we fix that disruption, get the amplitude back up, does it fix the cardiovascular problems.”

If intermittent fasting, which should help restore the normal peaks and valleys of glucose levels, or the clock-fixer drugs they are using for these studies interfere with progression to cardiovascular problems, they should have some answers.

They and others already have evidence that the small, clock-fixer molecule they are using, nobiletin, enhances the amplitude of and reverses the reduction of clock function in obesity. Whether or not that improves cardiovascular function, is one of the things they want to learn more about now.

That includes checking whether high glucose and resulting clock dysfunction work through the increased expression of galectin-3, a receptor associated with cardiovascular disease that they have seen in their mouse model, to produce expression of the gene NOX1, which converts oxygen to damaging super oxide, in endothelial cells.

They still are not certain which clock(s) are most central to this problem. Everywhere they have looked—heart, kidney, liver, blood vessels and endothelial cells—they have seen these rundown clocks. For now they are focusing on clocks in the endothelial cells, where they think a lot of the problems start. They don’t expect to identify a specific clock(s) in these studies, but if their findings continue to hold they will start knocking out clocks in other cells in future studies.

They think the problem quite literally is about timing, says Fulton. Proper signaling requires a peak and trough and constant overstimulation by too much glucose has the body instead trying to turn clocks off.

The scientists note that if you have a healthy musculature despite obesity, it mitigates, at least for a time, the impact of high glucose on the vasculature. Muscle is a first and fast user of glucose, quickly pulling it out of the circulation. “If it goes into the muscle, it never comes out again,” says Stepp. “It gets used or stored for later.” Obese mice, like humans, lose muscle mass. In some of their initial studies, they preserved muscle mass in obese mice, which also prevented cardiovascular damage.

They note that both aging, when muscle naturally loses volume even in individuals who remain active, and spinal cord injuries or other conditions that leave us immobile, have some of the same cardiovascular risks as obesity.

While circadian-related cardiovascular risk also is heightened by lifelike scenarios like shiftwork or chronic jet lag in even a lean mouse, it is way worse for an obese one, Stepp says.