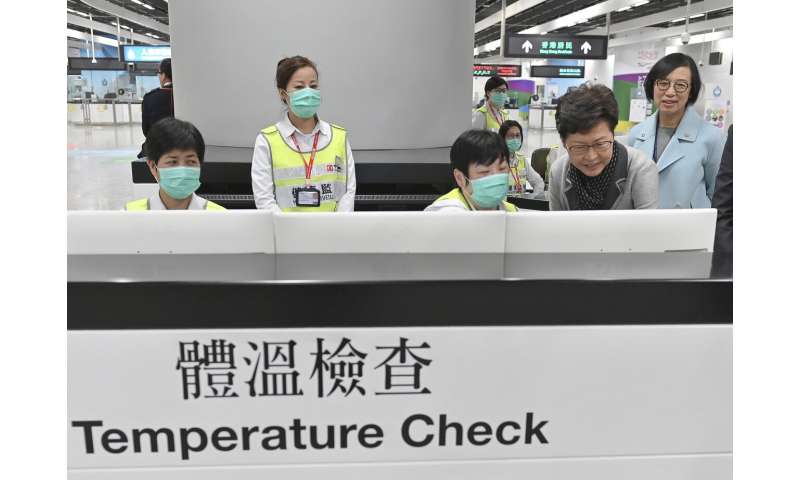 Hong Kong authorities activated a newly created “serious response” level Saturday as fears spread about a mysterious infectious disease that may have been brought back by visitors to a mainland Chinese city.

Five possible cases have been reported of a viral pneumonia that has also infected at least 44 people in Wuhan, an inland city west of Shanghai and about 900 kilometers (570 miles) north of Hong Kong.

The outbreak, which emerged last month, has revived memories of the 2002-2003 SARS epidemic that started in southern China and killed more than 700 people in the mainland, Hong Kong and elsewhere.

The serious response level indicates a moderate impact on Hong Kong’s population of 7.5 million people. It is the second highest in a three-tier system that is part of a new government plan launched Saturday to respond to infectious diseases of unknown cause.

The city’s health department added an additional thermal imaging system at Hong Kong’s airport on Friday to check the body temperature of arriving passengers. More staff have been assigned for temperature checks at the West Kowloon high-speed rail station that connects Hong Kong to the mainland.

City leader Carrie Lam, on a visit to the train station Friday to review the health surveillance measures, urged any travelers who develop respiratory symptoms to wear surgical masks, seek medical attention and let doctors know where they have been. The Wuhan health commission said 11 of the 44 people diagnosed with the pneumonia were in critical condition as of Friday. All were being treated in isolation and 121 others who had been in close contact with them were under observation.

Most of the cases have been traced to the South China Seafood City food market in the suburbs of sprawling Wuhan, where offerings reportedly include wild animals that can carry viruses dangerous to humans. The commission said the market has been disinfected.

The most common symptom has been fever, with shortness of breath and lung infections in a small number of cases, the commission said, There have been no clear indications of human-to-human transmission of the disease.

The latest cases in Hong Kong are two women, aged 12 and 41, who had been to Wuhan in the past 14 days but did not appear to have visited the food market, the Hospital Authority said. They were in stable condition and being treated in isolation at Princess Margaret Hospital.