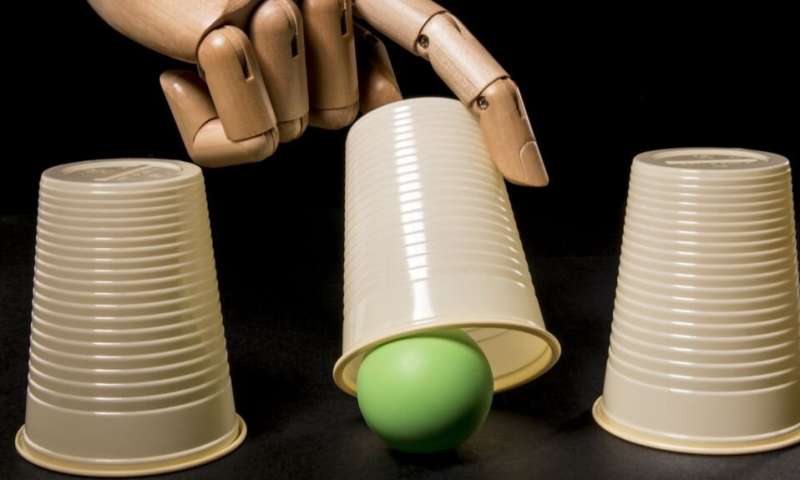 Humans are particularly good at using generalizations from past experiences to make broad assumptions when they are faced with little information about new experiences.

In a new study, researchers from the University of Oxford, UCL and DeepMind, looked at whether such abstract knowledge affects how we approach new experiences.

It is thought that making these inferences relies on the models of the world that we create in our mind during everyday experiences, which use the same neural mechanisms (and brain cells) that help us understand our position relative to other objects and places.

The researchers trained participants in a task defining an ordering of everyday objects, and then presented a new set of familiar objects in a scrambled order—during which they applied MEG neuroimaging to map brain activity in the participants.

They observed that representations of the new objects were reactivated during subsequent rest. These “replay” events occurred much faster than in their actual experience.

Human replay occurs while the brain is resting between exercises, and reverses direction after a reward has been given for making the correct choice.

Professor Timothy Behrens of Oxford’s Nuffield Department of Clinical Neurosciences, who was involved in the research, said: “Replay plays out events in a different order to the order they were seen in, which is a sophisticated jump for the brain to make.

“A defining feature of human intelligence is the ability to make strong inferences on the basis of sparse observations. If you notice your husband’s wallet on the kitchen table, you immediately know he is more likely to be in the garden than the pub. It is completely unknown how such inferences are performed in our brains, but our research suggests an important role for replay.

“Our ability to use prior knowledge to reorder events allows experiences to be sampled out of order and reconfigured flexibly later.

They also found that replay is factorized—that is, multiple representations of different aspects of events are replayed simultaneously, and these different representations can be recombined to make new events.

This is important because factorized representations are a powerful means of generalizing knowledge.

“With factorized representations, individual experiences can be decomposed into parts and these parts can be meaningfully recombined in a vast number of ways—which has the potential to dramatically improve learning,” said lead author Yunzhe Liu, a Ph.D. student in the Max Planck UCL Centre for Computational Psychiatry & Ageing Research and Wellcome Centre for Human Neuroimaging at UCL.

“Factorised replay provides powerful computational efficiencies that may facilitate inferences and generalizations in a broad array of cognitive tasks,” he added.