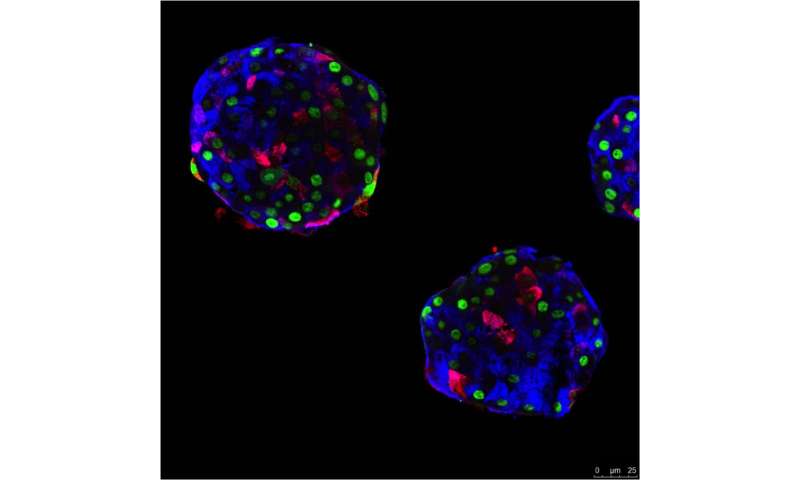 Biology textbooks teach us that adult cell types remain fixed in the identity they have acquired upon differentiation. By inducing non-insulin-producing human pancreatic cells to modify their function to produce insulin in a sustainable way, researchers at the University of Geneva (UNIGE), Switzerland, show for the first time that the adaptive capacity of our cells is much greater than previously thought. Moreover, this plasticity would not be exclusive to human pancreatic cells. A revolution for cell biology, to be discovered in the journal Nature.

The human pancreas harbours several types of endocrine cells (α, β, δ, ε and ϒ;) that produce different hormones responsible for regulating blood sugar levels. These cells are bundled into small clusters, called pancreatic islets or islets of Langerhans. Diabetes occurs when, in the absence of functional β cells, blood sugar levels are no longer controlled. At the UNIGE Faculty of Medicine, Professor Pedro Herrera and his team had already demonstrated, in mice, that the pancreas has the ability to regenerate new insulin cells through a spontaneous mechanism of identity change of other pancreatic cells. But what about the human being? Moreover, is it possible to artificially promote this conversion?

From one hormone to another: a long-term change

To explore whether human cells have this ability to adapt, Geneva scientists used islets of Langerhans from both diabetic and non-diabetic donors. They first sorted the different cell types to study two of them in particular: α cells (glucagon producers) and ϒ; cells (pancreatic polypeptide cells). “We divided our cells into two groups: one where we introduced only a fluorescent cell tracer, and the other where, in addition, we added genes that produce insulin transcription factors specific to β cells,” explains Pedro Herrera.

The researchers then reconstructed “pseudo-islets” with only one cell type at a time to accurately study their behaviour. “First observation: The simple fact of aggregating cells, even into monotypic pseudo-islets, stimulates the expression of certain genes linked to insulin production, as if the “non-β” cells naturally detected the absence of their “sisters.” However, in order for the cells to start producing insulin, we had to artificially stimulate the expression of one or two key β cell genes,” says Kenichiro Furuyama, a researcher in the Department of Genetic Medicine at the Faculty of Medicine of the UNIGE and the first author of this work. One week after the experiment began, 30 percent of the α cells were producing and secreting insulin in response to glucose. ϒ;-Cells, under the same treatment, were even more effective and numerous in converting and secreting insulin in response to glucose.

In a second step, the researchers transplanted these monotypic pseudo-islets of modified human α cells into diabetic mice. “Human cells proved to be very effective. The mice recovered!” rejoices Pedro Herrera. “And as expected, when these human cell transplants were removed the mice became diabetic again. We obtained the same results with cells from both diabetic and non-diabetic donors, showing that this plasticity is not damaged by the disease. In addition, this works in the long term: six months after transplantation, the modified pseudo-islets continued to secrete human insulin in response to high glucose.”

Cells that are more resistant in autoimmune diabetes

A detailed analysis of these human glucagon cells that have become insulin producers shows that they retain a cell identity close to that of α cells. Autoimmune diabetes, or type 1 diabetes, is characterized by the destruction of β cells by the immune system of patients. The researchers then wondered whether these modified α cells would also be targeted by autoimmunity, since they remain different from β-cells. To test their resistance, they co-cultured them with T cells from patients with type 1 diabetes. “We found that modified α cells triggered a weaker immune response, and therefore might be less likely to be destroyed than native β cells.”