Quite literally meaning “grave muscle weakness,” myasthenia gravis is a chronic autoimmune disorder that causes serious weakening of skeletal muscles responsible for movements such as ocular motion, eye-opening, swallowing, and breathing. Although symptoms can be controlled, there is currently no cure for this potentially debilitating disease.

In normal muscle tissues, movement is triggered when nerve endings release a neurotransmitter called acetylcholine, which binds to a receptor on muscle cells. This binding activates the muscle and causes it to contract. Myasthenia gravis occurs when the immune system—which usually protects us from invading pathogens—mistakenly attacks the acetylcholine receptors needed for muscle movement. Controlling the immune response is therefore key to treating myasthenia gravis.

Bearing this in mind, researchers at Kanazawa University investigated whether pathways that regulate the immune response, known as immune checkpoints, could be harnessed for the treatment of myasthenia gravis. The findings are published in a recent issue of the Journal of Neuroimmunology. Lead author Kazuo Iwasa describes the rationale behind the study: “Inhibitory checkpoint molecule programmed cell death 1 (PD-1) and its ligands, PD-L1 and PD-L2, inhibit T-cell signaling and are extremely important for immunotolerance. Disruption of this pathway has been implicated in other autoimmune disorders, but its role in myasthenia gravis is unclear.” 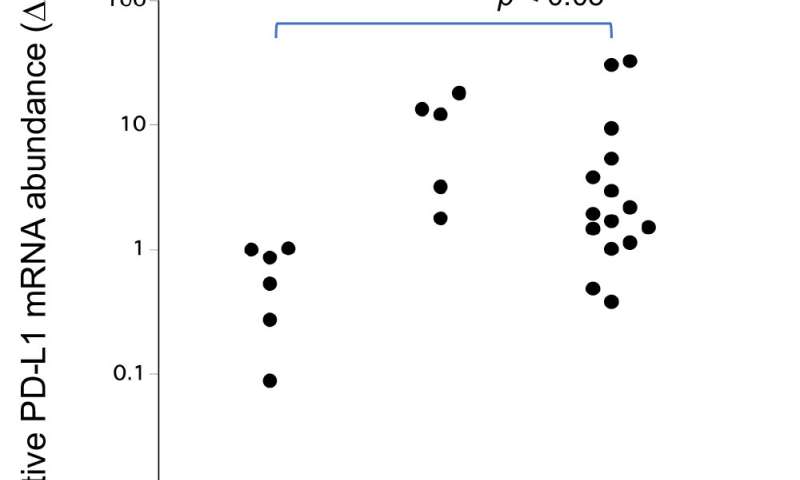 Using a specific fluorescent antibody, or marker, that binds to PD-L1, the research team showed that the ligand was more abundant in muscle tissues collected from myasthenia gravis patients compared with muscles from healthy individuals. Studying gene expression in these tissues confirmed their initial findings, with results showing that the PD-L1 gene was more highly expressed in patient tissues. Importantly, there was no difference between male and female patients, and gene expression was not influenced by the presence of tumors in the thymus, the organ responsible for the maturation of T-cells. However, there did appear to be a reciprocal association between PD-L1 gene expression and disease severity.

“The unimodal relationship between PD-L1 gene expression and disease severity was particularly enlightening,” says study corresponding author Masahito Yamada. “As disease severity increases, so does PD-L1 expression in muscle cells, which may influence autoimmune reactivity and help to reduce or stabilize disease severity. Knowing this, we can potentially develop therapies targeting the PD-1 pathway to eliminate the symptoms of myasthenia gravis.” 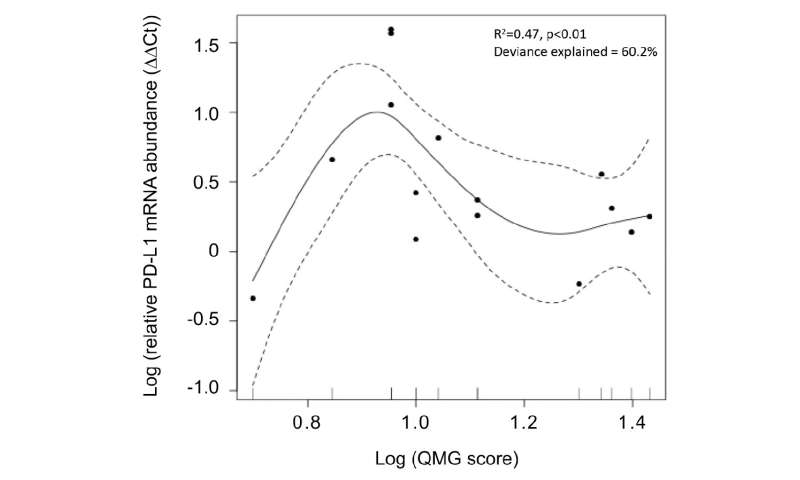