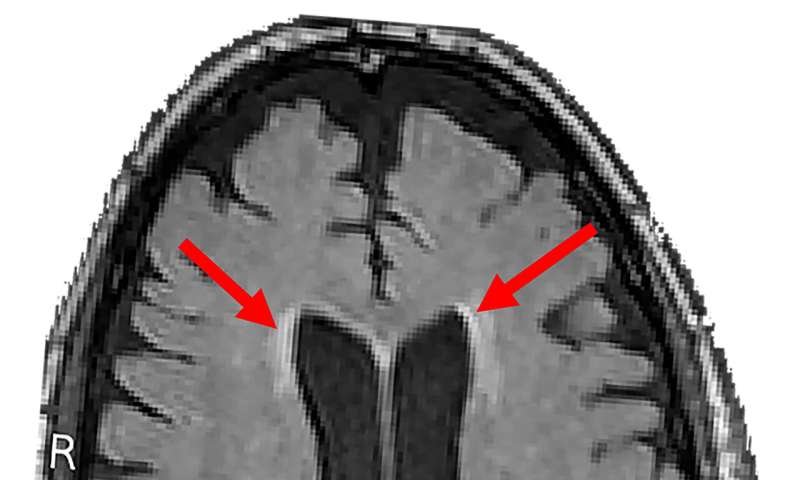 In a nationwide study, researchers used magnetic resonance imaging (MRI) to scan the brains of hundreds of participants in the National Institutes of Health’s Systolic Blood Pressure Intervention Trial (SPRINT) and found that intensively controlling a person’s blood pressure was more effective at slowing the accumulation of white matter lesions than standard treatment of high blood pressure. The results complement a previous study published by the same research group which showed that intensive treatment significantly lowered the chances that participants developed mild cognitive impairment.

“These initial results support a growing body of evidence suggesting that controlling blood pressure may not only reduce the risk of stroke and heart disease but also of age-related cognitive loss,” said Walter J. Koroshetz, M.D., director of the NIH’s National Institute of Neurological Disorders and Stroke (NINDS). “I strongly urge people to know your blood pressure and discuss with your doctors how to optimize control. It may be a key to your future brain health.”

Brain white matter is made up of billions of thin nerve fibers, called axons, that connect the neurons with each other. The fibers are covered by myelin, a white fatty coating that protects axons from injury and speeds the flow of electrical signals. White matter lesions, which appear bright white on MRI scans, represent an increase in water content and reflect a variety of changes deep inside the brain, including the thinning of myelin, increased glial cell reactions to injury, leaky brain blood vessels, or multiple strokes. These changes are associated with high blood pressure, or “hypertension”.

As described on the NIH’s Mind Your Risks website, several studies have suggested that people who have hypertension have a greater chance of accumulating white matter lesions and also of experiencing cognitive disorders and dementia later in life.

These observations were tested in a “gold standard” randomized clinical trial, called SPRINT Memory and Cognition in Decreased Hypertension (MIND), which examined whether controlling blood pressure levels could prevent or slow white matter lesion progression and aging brain disorders. The results were published on Aug. 13, 2019 in the Journal of the American Medical Association.

“These findings on white matter lesions—primarily in the aggressive control of blood pressure—are encouraging as we continue to advance the science of understanding and addressing the complexities of brain diseases such as Alzheimer’s and related dementias,” said Richard J. Hodes, M.D., director of the NIH’s National Institute on Aging (NIA).

Launched in 2010, the NIH-supported SPRINT effort initially enabled scientists to compare the effects of standard versus intensive blood pressure control on cardiovascular health and mortality. More than 9,300 adults who were at least 50 years old and had a high risk for cardiovascular disease received either standard treatment, which lowered systolic blood pressure, the first of two numbers measured during an exam, to less than 140 mm Hg (<140 mm Hg), or intensive treatment to lower the same pressure reading below 120 mm Hg (<120 mm Hg). In August 2015, NIH surprisingly ended the trial early after initial results showed that 3.3 years of intensive treatment significantly reduced the rates of death and cardiovascular disease.

The NIA and NINDS supported sub-study, SPRINT MIND, enabled scientists from 27 clinical sites to examine the effects these treatments had on the brain by measuring cognitive function and acquiring MRI scans on a subset of SPRINT participants. The researchers compared brain scans of 449 participants that were taken at enrollment and four years later. During this time, the average increase in total volume of white matter lesions on scans of the intensive treatment group was 0.92 cm3, which was less than the 1.45 cm3 seen on scans from the standard treatment participants.

“Intensive treatment significantly reduced white matter lesion accumulation in people who had a higher chance of experiencing this kind of damage because they had high blood pressure,” said Clinton B. Wright, M.S., M.D., director of the Division of Clinical Research at NINDS, and an author of the study.

The SPRINT MIND researchers also reported slightly more loss of brain volume in the intensive treated group than those in the standard treatment. The effect was seen predominantly in males. However, the authors noted this loss was generally very small and of unclear clinical significance.

“SPRINT MIND has produced promising initial results in the battle against the nation’s growing problem with aging brain disorders. Both the brain scans and the cognitive tests reinforce the potential benefits that intensive blood pressure management may have on the brain,” said Lenore J. Launer, Ph.D., a senior investigator in the NIA Laboratory of Epidemiology and Population Sciences and co-author of the paper. “We hope that these findings will become the foundation for future studies on how to protect the brain throughout a person’s life.”