Leprosy is an infectious disease caused by a rod-shaped, microaerophilic bacillus Mycobacterium leprae. While it is relatively uncommon, it has been dreaded since ancient times because of its disfiguring and disabling nature. Even today it is the cause of much discrimination and poverty, as the deformities caused by this bacterium are permanent without reconstructive treatment. 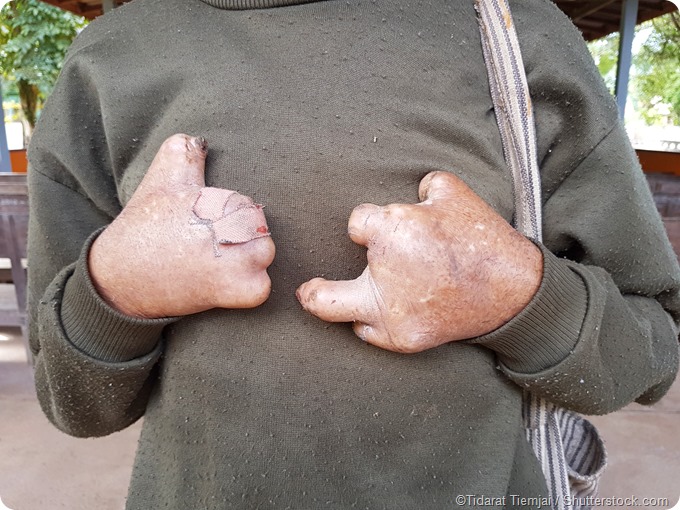 It is no wonder that the questions are asked why so much research devoted to leprosy. Some of the reasons include:

The International Federation of Anti-Leprosy Associations (ILEP) is developing a strategy which focuses on reducing leprosy transmission by research in five areas:

This resulted in new approaches to break the chain of transmission and thus reduce the future burden of disease, such as the viability and usefulness of administering chemoprophylaxis to healthy household contacts. For instance, when a single dose of rifampicin was given to contacts, the incidence of leprosy in contacts went down by over half.

The exact mode of transmission of leprosy is not yet conclusively proven, though the risk of infection has been shown to be highest among household contacts, and lowest among those who had no known contact with a leprous individual. Strain typing is being done in different regions of the world to identify the existence of an animal reservoir, such as the nine-banded armadillo in the US. This may help to detect patterns of transmission in endemic areas.

Research is also required to assess how HIV infection affects leprosy and its transmission, manifestations, leprosy reactions, and reaction to drug treatment. Some findings suggest that there is a higher frequency of immune-mediated responses that complicate leprosy in co-infected patients.

Since the primary epidemiologic indicator of current transmission is new cases in children, vaccines to prevent infection (immunoprophylaxis) are being developed and studied, as well as ways to increase the efficacy of existing vaccines.

It is important to study the use and effectiveness of existing and newer drugs in leprosy, such as rifampicin, ofloxacin, minocycline, and clarithromycin. Some may be effective as single-dose supervised regimens in some types of paucibacillary leprosy.

Intermittent fully supervised regimens, in contrast to self-administered daily regiments, may make a huge difference in the cure rate, the development of secondary disabilities, and the emergence of drug-resistant strains. It is also important to identify the occurrence of post-treatment relapses and the development of resistance.

Innovative ways of community intervention, education, and motivation to garner support for socioeconomic rehabilitation of leprosy patients are being studied to help achieve early diagnosis and treatment, which will help prevent disability.