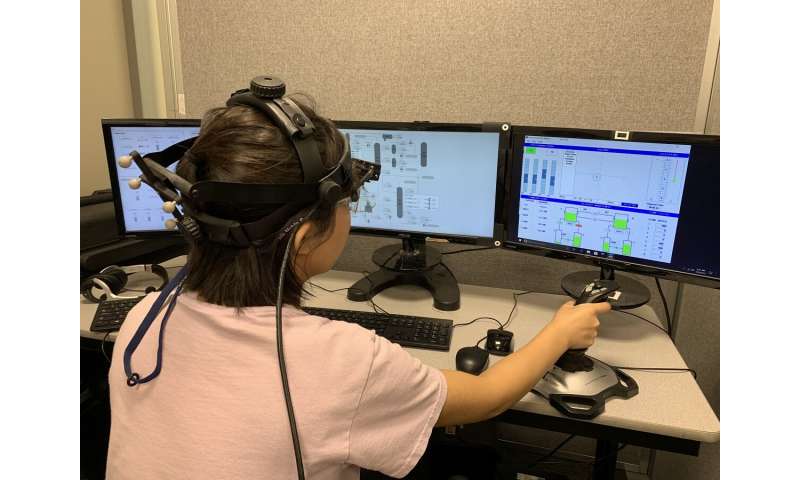 Jugglers are skilled at keeping several objects in motion at the same time using a combination of tossing motions and eye movement. As objects are added to a juggler’s routine, their gaze moves as the juggler tries to focus on all of the objects and avoid dropping one or two.

People who often multitask at work might feel like a juggler at times. In a work setting—such as an oil refinery—where a person needs to keep tabs on multiple gauges and systems to keep systems working properly, a change in a person’s eye movement could cause a mistake, and possibly cost a life. With the ever-increasing connectivity of today’s society, the demand for a real-time way to evaluate how well an employee understands their current situation—often called situational awareness—has become a paramount safety issue for employers, especially those in industrial and manufacturing industries. Researchers at the University of Missouri believe studying a person’s eyes could help with this.

“An employee with poor situational awareness will miss some critical things that happen in their work area,” said Jung Hyup Kim, an assistant professor of industrial and manufacturing systems engineering in the MU College of Engineering. “If I am tired, burdened by other things, or my workload is beyond what I can handle, my awareness will go down, and there is no way to measure that in real-time.”

Researchers said the current method to evaluate a person’s situational awareness involves only asking questions; this is not enough. In the study, they created a simulated multitasking environment of an oil refinery control room. Participants had to monitor multiple gauges and other controls on a computer screen while simultaneously responding to unexpected events, such as alarms.

“We found a relationship between situational awareness and self-terminating visual search—or once you find a solution, you end the search,” Kim said. “So, if a person has a good understanding about the situation, then they can directly target the cause of the problem in a short amount of time. But if they do not have good awareness, then they may spend a long time searching randomly for the cause.”

Kim and Xiaonan Yang, a graduate student at MU, hope to test their model in a real-life environment to see if any changes are observed between that situation and their simulation.