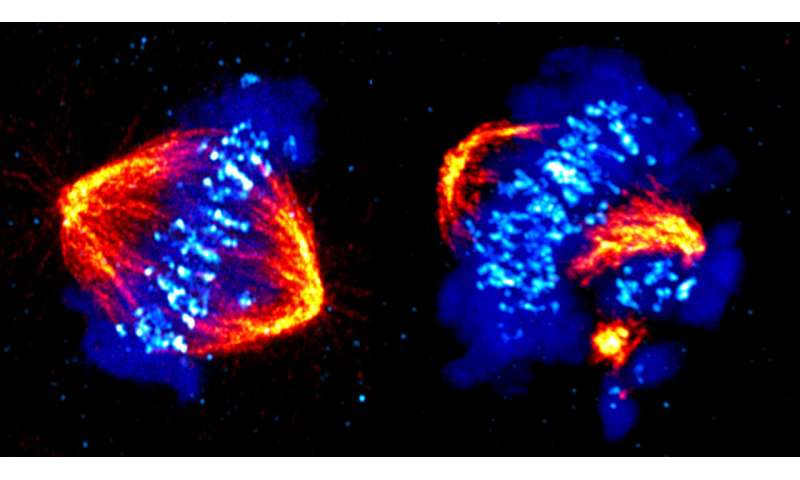 Metastatic ovarian, prostate and breast cancers are notoriously difficult to treat and often deadly. Now, Salk Institute researchers have revealed a new role for the CDK12 protein. The findings were published in the print version of Genes & Development on April 1, 2019.

“Approximately 3-5 percent of prostate, ovarian, and breast cancers contain mutations in the CDK12 gene, and recent studies have shown that this subset is uniquely responsive to immunotherapy drugs, whereas the majority of these cancers do not respond,” says Salk Professor Katherine Jones, senior author of the paper. “This suggests, for the majority of these cancers that lack a CDK12 mutation, chemical inhibitors of CDK12 could be used to make the cancer more easily killed by chemotherapy drugs, and potentially more sensitive to immunotherapy treatments as well.” The results suggest it could be a drug target for many cancers that have spread throughout the body.

By analyzing the role of CDK12 in protecting the cells from chemotherapy, the group discovered a new group of genes that are controlled by CDK12, including many genes that are regulated by another protein called mTORC1, which controls cancer cell metabolism. And although CDK12 is predominantly located in the nucleus of the cell, it works with mTORC1 to control the process of translation—an important step in creating a new protein within the cell.

“CDK12 is a recently identified gene that controls the expression of genes required for DNA repair, but its detailed mechanism and function are just beginning to be explored,” says first author Seung Choi, a former staff scientist and a current Salk research collaborator. “Therefore, if CDK12 is inhibited, the cell cannot repair DNA efficiently, and the cells are more prone to dying in response to chemotherapy. We wanted to understand how CDK12 might be involved in cancer in order to advance cancer treatment options.”

In a collaboration with the lab of Salk Professor Alan Saghatelian, the team was able to identify specific genes that were regulated by CDK12 at the level of translation. Several hundred genes were found to be controlled by CDK12 in this new way, many of which are tied to cancer cell growth.

To the surprise of the researchers, many of the other newly identified CDK12-regulated genes were critical for cell division (mitosis). Microscopy imaging studies by Seunjae Kim, a postdoctoral fellow at Salk, revealed that CDK12 helped the chromosomes condense and then separate to become two distinct cells. This role for CDK12 in the expression of a whole network of genes necessary for mitosis was entirely unknown.

“We’ve discovered a new translation pathway that nobody knew existed, which is used by a lot of the factors that are involved in cell division—specifically, separating the chromosomes,” says Jones, who holds the Edwin K. Hunter Chair in the Regulatory Biology Laboratory. “This new information about the role of CDK12 helps us understand how cancer cells are disorganized, and also how chemical inhibitors of CDK12 could help kill cancer cells. The findings suggest that targeted inhibitors to CDK12 might also block parts of the mTOR pathway, and synergize with mTOR inhibitors or mitotic inhibitors that are important components of current therapies.”