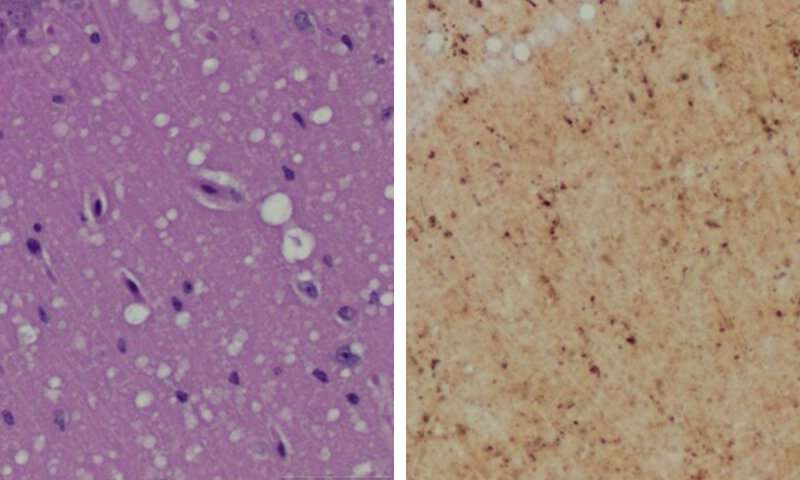 “Currently a definitive diagnosis of Creutzfeldt-Jakob disease is dependent on the examination of diseased brain tissue obtained at biopsy or autopsy. It has been impossible to detect at the early preclinical stage,” said Wenquan Zou, MD, Ph.D., associate professor of pathology at Case Western Reserve University School of Medicine.

In the new study, Zou and colleagues successfully detected prions in rodent skin samples as early as two weeks post-infection. They also detected prions in the skin of uninoculated rodents that were housed alongside inoculated cage mates, demonstrating that prion transmission can occur between cohabitating rodents.

Prions were detected in skin samples from the inoculated rodents before they showed anyclinical signs of prion disease. The researchers first inoculated the brains of hamsters and humanized transgenic mice with rodent or human prion samples, respectively. Then, they collected skin and brain samples at different time points, and used two different methods to detect disease-associated prion proteins in the tissues. In both hamsters and mice, the researchers detected prions in skin before they could be detected in brain tissue. The researchers concluded that skin prions could serve as a useful biomarker for preclinical diagnosis of prion diseases.

One of the methods, RT-QuIC, has been used to detect prion particles in symptomatic CJD patients. However, it normally requires invasive cerebrospinal fluid (CSF) sampling that may be contraindicated for certain patients. Additionally, “The CSF-based prion test results could be uncertain in some cases and not all CSF specimens from patients with prion disease are RT-QuIC positive,” said Qingzhong Kong, Ph.D., associate professor of pathology at Case Western Reserve University School of Medicine and co-corresponding author on the study. “Although skin samples may not replace CSF in routine RT-QuIC-based prion disease diagnosis, they may be helpful when prion disease is suspected but CSF is either unavailable or RT-QuIC-negative.”

The study results build upon previous work by Zou and colleagues showing that autopsy skin samples from human prion disease patients exhibit prion seeding and infectivity. The next step will be to develop and validate the skin prion tests for clinical use.

Said Zou, “Since the skin is readily accessible and skin biopsy is minimally invasive, detection of skin prions will be very useful for monitoring disease progression and assessing therapeutic efficacy during clinical trials or treatments when prion therapy becomes available in the future.”

Zou and Kong were recently awarded a $2.9 million grant from the National Institutes of Health to validate the test methods using human skin samples. They will determine if skin prions could serve as a diagnostic biomarker for CJD or a source of prion transmission.