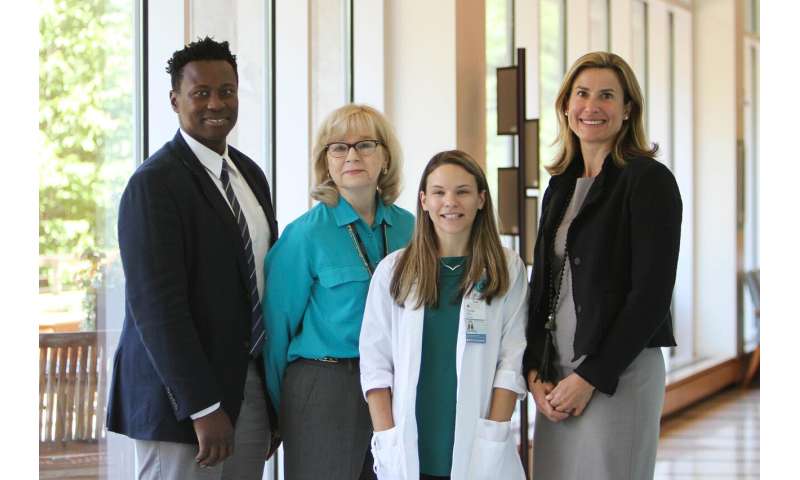 Crystal Chu has grown accustomed to her patients’ sometimes-impulsive responses after they’re diagnosed with cancer in a single breast.

“Cut them both off,” women often say to Chu, a University of Virginia oncology nurse and a Ph.D. student. “They’ve served their purpose. I’m ready.”

Chu’s response, however, is always gentle and more tempered.

“I usually ask them why they’re ready to have a double mastectomy,” said Chu, who says that fear drives most women to consider double mastectomies when cancer’s found on a single side, “and then explain that such surgery does not guarantee they’ll remain cancer-free, and may actually delay or even inhibit treatment of the cancer they have.”

After graduating from UVA’s R.N.-to-B.S.N. program in 2015, Chu’s first nursing research job was to recruit breast cancer patients into clinical trials—women who often coped with a barrage of unanticipated complications after surgery, including infections, pain, depression and decisional regret. It was work, Chu said, that gave her a vantage into her patients’ struggles with body image, lymphedema and their marital concerns.

“I was deeply moved,” said Chu, a first-generation college student who enrolled in the Ph.D. program in 2016.

Now at work on her dissertation, Chu is testing a novel decision aid for patients who have been diagnosed with cancer in one breast and are considering having both the cancerous and healthy breast removed—a procedure called a contralateral prophylactic mastectomy, or CPM.

Knowing that research has proven that better-informed patients have better outcomes and experience less regret, Chu is hopeful that the decision aid she’s developed will decrease the rates of CPM, which have, between 1998 and 2011, grown six-fold. Today, nearly one in five women with cancer in a single breast opt to have both breasts removed, despite the fact that there is no evidence that it reduces mortality and increases survival.

In 2016, the American Society of Breast Surgeons endorsed a consensus statement discouraging CPMs for women of average cancer risk, and the topic, says UVA breast surgeon Dr. Lynn Dengel, is ever-present at their annual meetings.

“This is a largely patient-driven phenomenon that happened after Angelina Jolie went public with her diagnosis and surgical options in 2011,” said Dengel, one of Chu’s mentors. “And while it’s a patient decision, it’s also the responsibility of the health care providers to ensure that the risks of these more aggressive surgeries are known.”

There’s evidence that women who choose CPMs and have both breasts reconstructed sometimes regret their choice down the line, Chu explained, due to issues with infections, arm mobility, post-operative pain, numbness, sexual dysfunction and body image problems. Also, CPMs may impose delays in the treatment of the cancerous breast due to infections, or surgical complications on the unaffected breast.

CPM is “a much more complicated surgery,” Chu said, “and poses a greater medical risk, a greater likelihood of pain, possibility of infection, a longer recovery time, and, by virtue of that, may require a longer wait time to administer subsequent chemotherapy and radiation treatments to fight the cancer in the diseased breast.”

Chu’s pilot decision aid, delivered on an iPad by a nurse in a hospital, aims to better inform these patients of the full spectrum of risks and benefits. In addition to partnering with Nursing School faculty mentors Patricia Hollen and Randy Jones, both of whom had already earned multi-million-dollar National Institutes of Health grants to develop decision aids for cancer patients, Chu is also working closely with Lynn Dengel, who applauded and underscored the importance of such decision aids.

“Decision aids are ideal when a patient has a significant medical choice to make that relies on ensuring that they have what they need to know to make the best decision possible, and understand the risks and benefits of each option,” Dengel said. “It’s wonderful that Crystal’s chosen this as an area of study; a contemporary topic and a way to improve patient care.”

While there are a host of decision aids available for breast cancer patients, Chu’s is the first to emphasize shared decision-making and an interactive balance sheet that takes pain, risks, costs and recovery into account. Jones said Chu’s research is filling a much-needed gap.

“Crystal’s dissertation findings are much-needed in the literature,” Jones said. “Some people are not fully informed or aware of the treatments’ side effects, benefits and risks, which can lead to regret and poor quality of life. She’s chosen an important topic to examine in-depth and provide better insight among those who are faced with these complex decisions.”

Chu hopes the decision aid—currently being tested on 50 local women—will ultimately reduce the number of CPMs done, both at UVA and elsewhere.