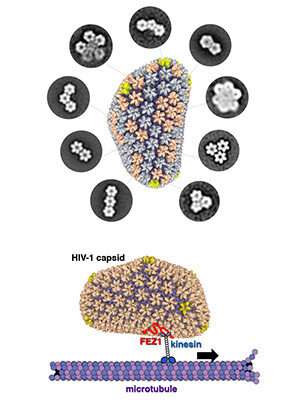 The genome of the HIV-1 virus is protected by a conical-shaped protein shell called a capsid, which performs many functions crucial to viral infection—shielding the virus from the immune system, attaching to cell’s transport network, and hijacking cellular machinery to reproduce. The capsids are comprised of hundreds of copies of a viral protein that form specific patterns, some of which provoke defenses of the host cell and others which recruit help in spreading viral infection.

Yale researchers led by Brady Summers, a graduate student in the lab of Yong Xiong, professor of molecular biophysics and biochemistry, have devised a method to capture individual patterns and uncover their effects during infection. “These protein fragments are like Legos, the basic building blocks of the capsid, and each has a different function,” Xiong said. For instance, one such fragment studied enabled the capsid to attach to the cytoskeleton to move inside the cell. Understanding the function of each pattern may help researchers to either enhance effects of the interactions that elicit host defenses or obstruct those that promote infection, he said.