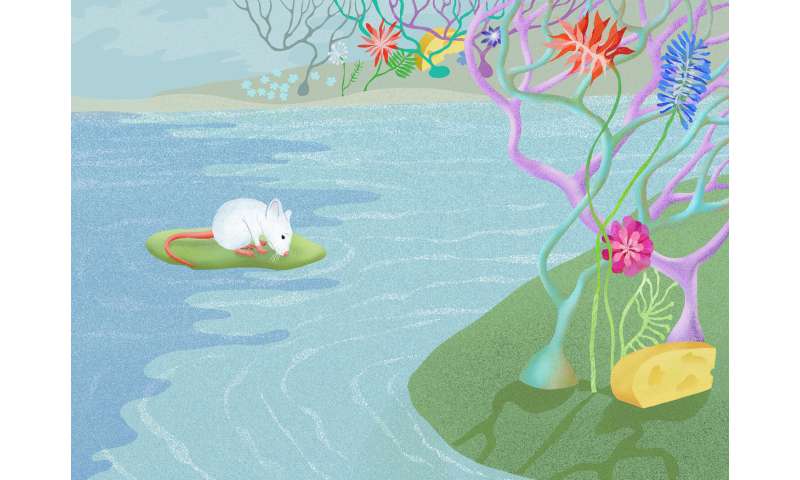 The insular cortex is an important, yet almost hidden part of the cerebral cortex. Here, sensory information, bodily states, feelings and emotions come together. However, how the insular cortex processes this information and how this affects behavior is largely unknown—knowledge that would help us to better understand the mechanisms involved in depression, anxiety and eating disorders, for example. Nadine Gogolla and her team at the Max Planck Institute of Neurobiology were now able to show how the insular cortex of mice processes such strong feelings as fear or bodily discomfort, and how this affects their behavior.

Feelings and emotions greatly influence our behavior. “Which is a good thing!” says Nadine Gogolla, Research Group Leader at the Max Planck Institute of Neurobiology. “For example, if a mouse smells a fox, the feeling of fear causes it to hesitate from exploring its surroundings, and also stops it from eating.” Negative bodily states such as nausea have a similar inhibitory influence. Gogolla and her team have now shown that these very different negative feelings and behavioral adjustments are linked via the posterior insular cortex.

First author Daniel Gehrlach and his colleagues in Gogolla’s group discovered that nerve cells of the posterior insular cortex respond to a large number of different sensory information, emotions and bodily states. All of the information that is processed here has a direct negative effect or acts as an aversive signal for the animal. Interestingly, individual nerve cells can react to many different negative stimuli such as bitter taste, fear, pain, thirst, or bodily discomfort.

As soon as the cells detect these negative states, they forward the information to the amygdala or nucleus accumbens via two different pathways. These two brain regions are known to directly regulate an animal’s behavior. “For the first time, we could now demonstrate the influence of the insular cortex on behavior via these two connections,” says Gogolla.

Activation of the neuronal pathway from the insular cortex to the amygdala primarily causes behavioral adjustments to fear: The mouse reduces its food intake, social contacts and exploration of its surroundings. When the researchers suppressed this pathway’s activity, the animals become less afraid.

Activating the pathway to the nucleus accumbens, on the other hand, had a similar effect as an illness—the mice stopped eating. Conversely, by inactivating this pathway, the animals still ate even when being nauseous. “By being able to directly modify and observe neuronal activity in mice, we were able to show specific mechanistic relationships that are an important step towards a true understanding of anxiety, depression and eating disorders,” explains Gogolla.

Both strong negative emotions and the feeling of being sick should induce humans and animals alike to take care of, and protect themselves. Anxieties and depression arise when negative emotions become too strong or too frequent. “It is possible that the insular cortex learns from previous experiences, so that the cells react stronger or faster to the next negative impression,” reasons Gogolla. “Once we have learned to understand such relationships, we may be able to find a way to reverse or at least contain them.”