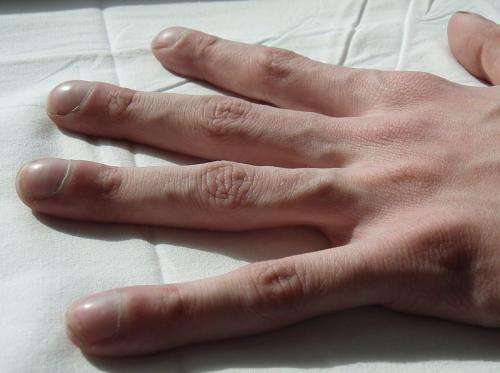 Chronic bacterial infections in the lungs of cystic fibrosis patients are worsened by a previously unappreciated biological agent: a group of viruses that infect the bacteria.

The viruses form a biofilm that sequesters antibiotics away from bacteria, potentially contributing to the development of antibiotic resistance in CF patients’ lungs, a new study from the Stanford University School of Medicine has found.

A paper describing the study, which involved 110 children and adults with CF, will appear April 17 in Science Translational Medicine. It is the first to explore how filamentous phages, which are stringy bacteria-attacking viruses, can contribute to lung disease. Understanding how the viruses work could lead to better CF therapies.

“Phages haven’t been thought of as pathogens that affect humans,” said lead author Elizabeth Burgener, MD, an instructor of pediatrics at Stanford. “This is a whole new paradigm of thinking about them.”

The study’s co-senior authors are Paul Bollyky, MD, Ph.D., assistant professor of medicine and of microbiology and immunology, and Carlos Milla, MD, professor of pediatrics. Milla and Burgener are pediatric pulmonologists at Lucile Packard Children’s Hospital Stanford, where they treat CF patients.

Because phages infect only bacterial cells, scientists have assumed that the viruses do not act on human health. The new study’s findings contradict this assumption: CF patients with phage-infected bacteria in their lungs fared worse than those with uninfected lung bacteria.

“We saw that phage infection of the lung bacteria is associated with more antibiotic resistance in patients,” Burgener said. Scientists have struggled to understand how an aggressive bacterial species, Pseudomonas aeruginosa, persists in the lungs of CF patients who are receiving antibiotics, she added. “We think the virus is helping Pseudomonas to establish chronic infection in CF patients’ lungs and potentially making patients sicker over time.”

Cystic fibrosis is a genetic disease that causes the lungs to produce unusually thick, sticky mucus. Over time, patients tend to develop chronic bacterial infections, which can lead to respiratory failure and death. By adulthood, the lungs of about half of CF patients are infected with Pseudomonas. The infection is linked to worsened prognosis.

“When somebody first grows Pseudomonas, we try to eradicate it with antibiotics,” Burgener said. Patients inhale high doses of antibiotics directly into their lungs. But the bacteria often keep growing.

To see how the phages and bacteria might work together, the researchers took advantage of a quirk of the biology of filamentous phages: When these phages infect the bacteria, they do not kill them; rather, the still-living bacteria incorporate the phage DNA into their own DNA and begin churning out lots of viral particles.

The researchers looked at genetic analyses of Pseudomonas bacteria from the lungs of 34 CF patients in Denmark. The patients had had their bacterial DNA sequenced repeatedly over time, allowing the researchers to see whether phage DNA had been persistently incorporated into the bacterial genomes. Patients were more likely to develop consistent phage infections as they got older, supporting the idea that the virus-infected bacteria come to dominate CF patients’ lungs over time. The average age of patients without the phages was 13, while the average age of phage-infected patients was 19.

Burgener and her colleagues also collected sputum samples from 76 people with CF, both adults and children, who were receiving treatment at Stanford. The team tested the sputum for genetic signatures from Pseudomonas and filamentous phages and found that 58 people had Pseudomonas infection. The researchers studied information from the patients’ medical records on lung function, what bacteria had been growing in their lungs over time and other health indicators.

“The thing that really stood out was that patients with phage and Pseudomonas had significantly more antibiotic resistance than patients that didn’t have phage,” Burgener said.

How does antibiotic resistance happen?

The researchers previously showed that phage particles glom together into a liquid-crystal structure, a slimy biofilm, which grabs onto antibiotic molecules. In the new study, they tested whether this could prevent antibiotics from diffusing to bacteria. The phage biofilm sequestered aztreonam, amikacin and meropenem away from bacteria, the team showed.

“We think the biofilm is protecting Pseudomonas,” Burgener said. As the biofilm sequesters antibiotics, the bacteria sees sub-therapeutic levels of the drugs, allowing individual drug-resistant bacteria to grow and gradually take over in the lung.

The researchers think the physical properties of the different types of antibiotic molecules—such as whether the drugs have charged or neutral surfaces—may explain why some antibiotics get stuck in the phage biofilm and others do not.

“If we’re able to confirm these results, it may affect how we choose antibiotic therapy for patients who have CF and Pseudomonas,” Burgener said.

The next step is to understand how CF patients’ bodies respond to the phages, Burgener said, adding, “It’s shocking how much effect the phages have on the host immune system.”

Bollyky recently led another study that suggests it may be possible to vaccinate against the phage.