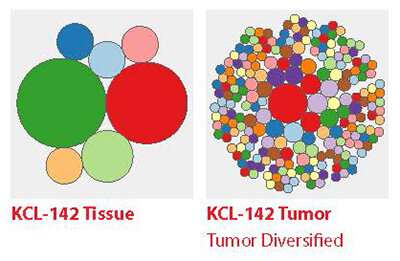 A unique type of immune cell has been discovered in human breast tissue, and breast cancer patients with more of these cells are more likely to survive, finds new research from the Francis Crick Institute and King’s College London. The research was part-funded by Cancer Research UK and Breast Cancer Now.

The study, published in Science Translational Medicine, identified a specific subtype of gamma delta T cells in breast tissue and showed that they were linked to remission in patients with triple negative breast cancer. Gamma delta T cells are specialist immune cells that have previously been identified in the human gut and skin, but this is the first time they have been clearly characterised in human breast tissue.

“Proving that these special cells are present in human breast tissue is an exciting first,” said Dr. Fernanda Kyle-Cezar, joint lead author of this paper. “We knew from animal model studies that gamma delta cells might play an important role in killing tumours, but this is the first clear evidence that they may do so in human breast cancer. The discovery opens the door to look at new ways we may be able to tackle this devastating disease.”

There are around 55,000 new cases of breast cancer diagnosed each year, of which around 15% are triple negative. This aggressive cancer does not respond to hormone therapy once it has spread, chemotherapy can only control the disease for a short period of time. Thus, further research into the disease and the body’s response is vital to develop more effective treatments.

The new study used a technique previously deployed to examine T cells in human skin and lungs, to conclusively prove the existence of gamma delta T cells in human breast tissue. These special cells, are much less common than ‘conventional’ alpha beta T cells in the bloodstream. The team studied healthy breast tissue from dozens of women, including those who had either undergone breast reduction surgery or preventative surgery to reduce cancer risk.

Having established that gamma delta T cells are present in breast tissue, the researchers further examined the link between a specific subset of these cells and survival rates for a group of 11 women with triple negative breast cancer treated at Guy’s and St Thomas’ Hospital Trust. The subset of cells in question express certain receptors, known as V delta 1 chains, on their surface and respond directly to stress signals that commonly arise as a result of infection or cancer. Once activated by a stress signal, these cells can go on to kill damaged or tumour cells, and also attract the attention of other potentially helpful alpha beta T cells.

By analysing tumour samples from breast cancer patients, the team found that those with higher numbers of V delta 1 T cells in their tumour were significantly more likely to survive than those with low numbers. Of the five patients who went into remission and survived their cancer, all had relatively high numbers of the cells in their tumours. Whereas, of the six patients who died within two years, only one had high numbers of these cells.

The research findings also seem to predict that an even greater chance of survival arises when the V delta 1 cells are present together with the more common alpha beta T cells, which also play a role in killing cancer cells.

“These findings unlock many more research angles and potential treatments,” explains joint-lead author Dr. Yin Wu, a clinician at Guy’s and St Thomas’ Hospital and University College Hospital and a researcher at Cancer Research UK’s City of London Major Cancer Centre. “It could mean that in the future we’re able to improve a patient’s chance of survival by either artificially activating more of these cells to fight the tumour cells or we could transfer cells from a donor.”

The study was led by Professor Adrian Hayday, who 35 years ago co-discovered the gamma delta T cell receptor that defines gamma delta T cells. He is also co-founder of GammaDelta Therapeutics which he formed in 2016 with his colleague Oliver Nussbaumer, to translate their research findings into clinical practice, and which has since received more than £100m of investment.

“These cells are an important part of the complex jigsaw in working out the best way to treat cancer,” explained Adrian, who is also a Professor of Immunobiology at the Crick and King’s College London. “We’re really excited about their potential to fight a range of cancers, including melanoma skin cancer, and believe we can now add breast cancer to that list. We hope to see clinical trials starting over the next couple of years, and new scientific findings like this add to our optimism about their potential.”

Dr. Iain Foulkes, Cancer Research UK’s executive director of research and innovation, said, “Through important discoveries like this, we’re understanding more and more about the complex interactions between our immune system and cancer. Treatments that harness the power of the body’s own immune system hold great promise for the future of cancer medicine and are already making a real difference for people with some types of cancer. That’s why we recently launched the Cancer Research UK City of London Centre for Biotherapeutics, which will transform the capital into a world leading hub for immunotherapy research.”