Vessels which are smaller than the size of arteries, such as arterioles, venules and capillaries, are classified as small vessels. Vasculitides affecting these vessels may be broadly divided into anti-neutrophil cytoplasmic antibodies (ANCA)-associated and non-ANCA vasculitides.

ANCA-associated small vessel vasculitis is the more common of the two. This category includes:

ANCAs are mainly IgG in nature. These are specific autoantibodies. Thus they are antibodies produced by the immune system that mistakenly target the individual’s own proteins. They are directed against antigens in the cytoplasm of neutrophils and monocytes.

ANCAs can be detected using techniques such as indirect immunofluorescence microscopy. This can visualize patterns which are either cytoplasmic, and are designated as c-ANCA, or perinuclear, designated as p-ANCA. C-ANCA is now called proteinase-3 ANCA (PR3-ANCA), and p-ANCA is called myeloperoxidase-ANCA (MPO-ANCA).

While ANCA titers are useful in establishing disease, they do not always correlate with disease activity. Thus a negative result does not always rule out the likelihood of disease in terms of ANCA-associated small vessel inflammation. Likewise, a positive result may not necessarily be sufficient to diagnose an ANCA-associated vasculitis. 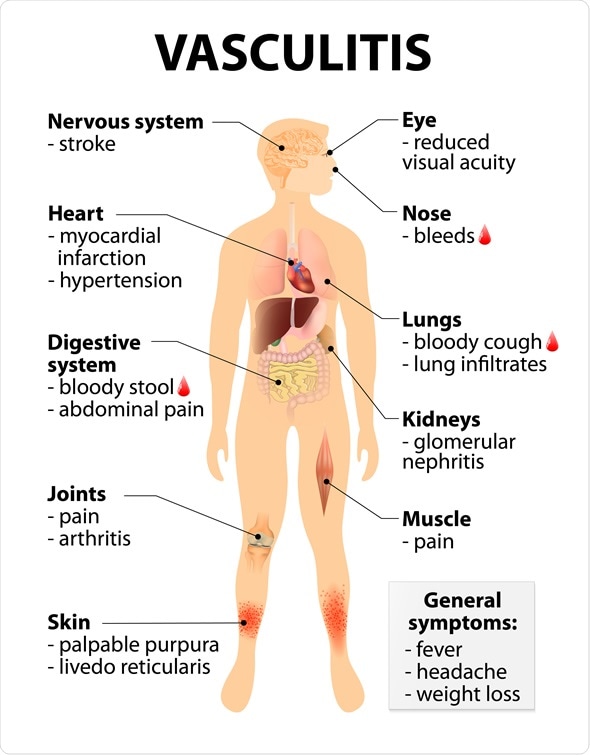 Symptoms of small-vessel vasculitis include:

MPA is the most common type of ANCA-associated small vessel vasculitis. It is more prevalent in men, with an average age of onset between the fourth and sixth decades of life.

The typical patient presents with glomerulonephritis and pulmonary capillaritis, which are inflammatory pathologies of the small vessels of the kidneys and lungs, respectively. The involvement of these organs makes MPA a predisposing factor for the development of the pulmonary-renal-syndrome.

This syndrome occurs in conditions such as Goodpasture’s syndrome (a rare autoimmune disorder that causes the progressive destruction of the basement membrane of the lung alveoli and the glomeruli in the kidneys by antibodies), systemic lupus erythematosus (SLE, an autoimmune-mediated disorder affecting the kidneys, skin, joints and other healthy tissue/organs) and WG.

WG has a similar prevalence and peak onset as MPA. It, however, presents with a classical triad of kidney, lung and upper respiratory tract manifestations. These include inflammation of the sinuses and middle ear, which may lead to hearing loss.

In addition to MPA and WG, another form of ANCA-associated vasculitis, namely, CSS, has a wider range with regard to the age range of onset, between 15 to 70 years. Like MPA and WG, its prevalence is higher in men. CSS manifests in three phases:

Drug-induced small vessel vasculitis develops within 1 to 3 weeks after the use of certain pharmaceutical preparations, including penicillin, thiazides and sulfonamides. The implicated drugs cause lesions that may be confined to the skin.

The treatment of ANCA-associated small vessel vasculitides is based, naturally, on the precipitating factor. If drug-induced, the drug is stopped. Antihistamines may be employed topically.

Systemic corticosteroids may be required for severe cutaneous and systemic disease. WG and MPA may require a specific tri-phasic approach to treatment, using corticosteroids and/or immunosuppressive drugs.

The therapy involves the (i) induction and (ii) maintenance of remission and (iii) the treatment of relapses.

Small vessel vasculitides caused by the deposition of immune complexes leads to hemorrhaging from the involved vessels. This includes a large group of disorders:

Studies have suggested that malignant neoplasms produce antigens that cause paraneoplastic vasculitis. The exact mechanism underlying the development of small vessel vasculitis in this group of conditions remains unknown.

Finally, inflammatory bowel disease (IBD) has also been implicated in the inflammation of small vessels. A leukocytoclastic vasculitide, also known as hypersensitivity vasculitis, is one of the less common skin manifestations of IBD.

Its pathogenesis is unclear, although ‘antigen mimicry’ (similarity between foreign and self-peptides that cross-activates the immune system) has been suggested.

Dr. Damien Jonas Wilson is a medical doctor from St. Martin in the Carribean. He was awarded his Medical Degree (MD) from the University of Zagreb Teaching Hospital. His training in general medicine and surgery compliments his degree in biomolecular engineering (BASc.Eng.) from Utrecht, the Netherlands. During this degree, he completed a dissertation in the field of oncology at the Harvard Medical School/ Massachusetts General Hospital. Dr. Wilson currently works in the UK as a medical practitioner.