Apples contain several components that are linked with a reduced risk of cardiovascular disease (CVD). Apples have demonstrated beneficial effects in the human body, including improved vascular function, on the maintenance of healthy levels of lipid and glucose.

Apples are the second-highest consumed fruit worldwide due to their widespread availability. They are an important contributor to total dietary intake. The cardiovascular protective effect of apples is exerted through various parameters including improved vascular function and decreased blood pressure. Moreover, apples have been shown to exert anti-inflammatory and anti-hyperglycemic effects as a consequence of polyphenols and fiber. 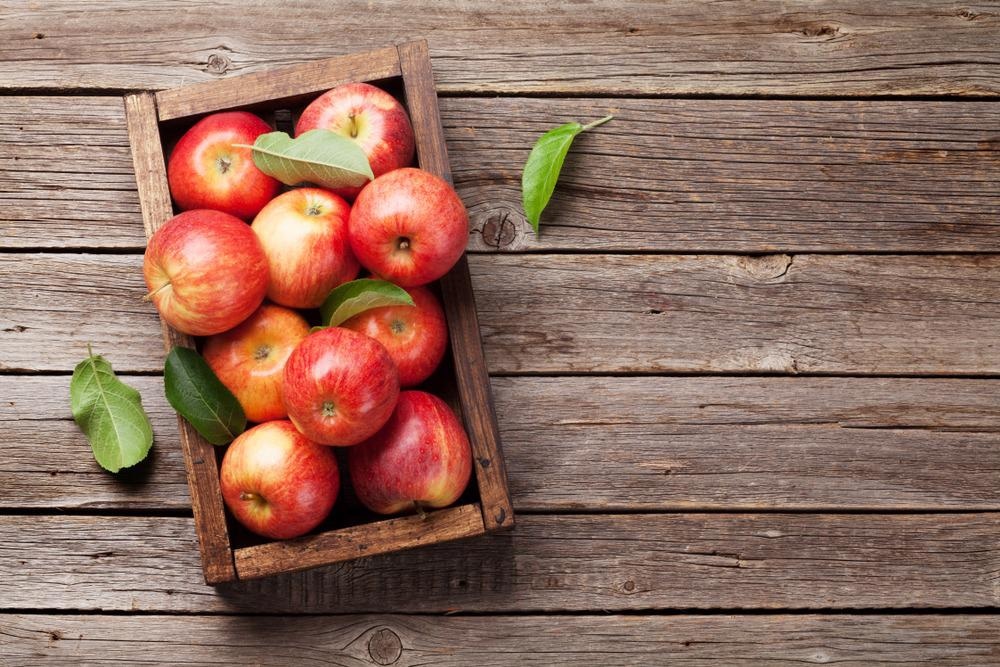 Apples contain water and carbohydrates in proportion 85:14. These carbohydrates include both fiber and sugar (which is predominantly fructose). Of the fiber, 100g of an apple contains 2.2g of total fiber (1.5g insoluble and 0.7 soluble).

Apples are also rich in vitamins, most notably vitamin C and vitamin E, alongside minerals and polyphenols. The dominant mineral present in apples is potassium.

An additional product, apple pomace, is a by-product of apple juice production. Pomace is rich in fiber and polyphenols on has become increasingly produced due to a growing trend in the food industry to recycling components of manufacture, which were previously seen as waste.

Approximately 70% of the total fiber in apples is insoluble, predominantly cellulose and hemicelluloses. The remaining 30% is soluble fiber, which is predominantly pectin. Pectin is a complex polysaccharide found in the cell wall of plants. Pectins cannot be metabolized in the upper gastrointestinal tract, and therefore provide a form of probiotic supplementation to the gut microbiota.

The beneficial effects of pectin include cholesterol reduction, reduced absorption of glucose, and an increase in the gastrointestinal concentration of short-chain fatty acids (SCFAs). Moreover, phenolic compounds can bind to both cellulose and pectin, forming covalent ether, carbon-carbon, and ester bonds. These covalent bonds enable the formation of insoluble-bound phenolics.

The fiber content of apples may produce an anti-inflammatory effect in the body. In a meta-analysis of human intervention studies, increase consumption of dietary fiber reported a decrease in the level of C reactive protein (CRP) is a biomarker of chronic inflammation. Moreover, the production of SCFAs in the colon inhibits nuclear factor-kappa B (NF-κB), a transcription factor implicated inf pro-inflammatory enzyme induction.

These anti-inflammatory effects may be exacerbated by the presence of prebiotic fiber, which reduces the intestinal permeability, and consequently the uptake of lipopolysaccharides (LPS). LPS is an endotoxin that is produced by gram-negative bacteria and serves as a potent antigen, capable of producing a strong immune response. It is believed that fiber in synergy with polyphenols is responsible for the collective anti-inflammatory properties of apples.

Apples may reduce the risk of developing type 2 diabetes by producing statistically significant delays in the rate of glucose absorption. This has been shown in an observational study of 38,000 and 18 women which demonstrated the consumption of more than one apple per day was associated with a 28% reduced risk of type 2 diabetes relative to those who did not consume any apples.

Other studies which corroborate this finding are animal and cell culture-based in nature. Polyphenols, namely quercetin-3-O-rhamnoside, phloridzin, and 5-caffeoylquinic acid, present in apples have been shown to inhibit the activity of glucose transporters.

Foods that are rich in polyphenols have been shown to decrease the risk of CVD. Epidemiological studies have shown a correlation between high polyphenol intake and reduced risk of CVD. Typically, polyphenols are found in their glycosylated form in food; however, compounds free of conjugation are also present. These are known as aglycones. The widest research class of polyphenols are flavonoids.

The apple peel contains a greater proportion of flavonoids relative to the flesh. This is attributed to the fact that the peel protects the fruit from harmful ultraviolet light as well as pathogens.

Can You Eat Too Much Fruit?

Flavanoids are mostly found in the peel and include the following: procyanidins, catechin, epicatechin, phlorizin, and quercetin glycosides. Apples also contain hydroxybenzoic and hydroxycinnamic acids (such as chlorogenic acid). These polyphenols (in synergy with pectin) protect against free radical damage, specifically in the cardiovascular system as well as producing a cholesterol-lowering effect.

Intervention studies examining intake of fresh apples, apple cider, or apple supplements have demonstrated varied results with regards to the lowering of cholesterol. This ranges from no effect to a slight reduction in total circulating cholesterol. However, a systematic review of five clinical trials found a consistent improvement across several cardiovascular parameters in humans.

These included decreased triglyceride and LDL cholesterol as a result of fresh or dried apples. Notably, the same effect was not seen following the consumption of apple juice.

Studies have noted a reciprocal relationship between polyphenol-rich foods and the gut microbiota. Dietary polyphenols have been evidenced to repress the growth of the bacterial species Firmicutes while supporting the growth of Bacteroidetes.

The ratio between Firmicutes and Bacteroidetes Is typically used as a marker for intestinal health. Apple pomace has been shown to increase gut health in rats by increasing the production of SCFAs and increasing the pH of the gut, supporting the growth of beneficial microbiota while inhibiting the proliferation of harmful pathogens.

Polyphenols also play a role in preventing dysbiosis (gut bacteria imbalances, leading to digestive disturbances). In particular, the polyphenyl quercetin has been shown to reduce the Firmicutes/Bacteroidetes ratio and inhibit the growth of bacterial species related to diet-induced obesity (Erysipelotrichaceae, Bacillus, Eubacterium cylindroides). Moreover, pathogenic Escherichia coli biofilms are prevented by phloretin, which also operates as a non-inflammatory molecule.

7 Health Benefits of Apple | Why Are Apples Healthy For You? | The Foodie

The Effects of Apple's on Blood Pressure and Vascular Function

Hypertension is a risk factor for CVD, and several studies have implicated flavonoid-rich food in reducing the risk of hypertension, and subsequently CVD. The causal mechanism of hypertension is thought to be endothelial dysfunction, often caused by a decrease in bioavailable nitric oxide (NO), a vasodilator.

Overall, the consumption of apples rich in flavonoids has been shown to produce a diastolic blood pressure reduction. This is particularly true of flavonoid epicatechin.

The consumption of apples has been associated with a reduced risk of all-cause mortality, cardiovascular disease, type 2 diabetes (and other metabolism-related conditions). It is important to note that while consumption of whole apples has been shown to improve vascular function, specifically decreasing systolic blood pressure and reducing cholesterol levels, apples in other forms such as apple juice have been associated with adverse effects. This is because of its high fructose, low fiber content.