Superman syndrome, also known as 47, XYY, is a condition classified as a chromosomal aneuploidy (which is an abnormality in chromosome structure and/or number) in which males have an additional Y chromosome. 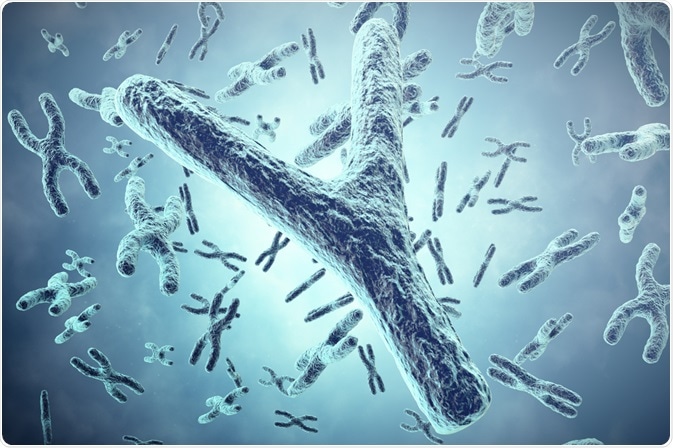 The normal male sex chromosomes are XY; in the case of Superman syndrome, males possess one additional Y chromosome in addition to the paternally inherited Y chromosome. As with other sex-linked aneuploidies, which describe sex chromosomal arrangements that differ from the normal 46, XX in females and 46, XY in males, this congenital condition is compatible with life.

The term ‘superman’ refers to the presence of the additional male-defining Y chromosome and affects approximately 1 in every 850 males. The 47, XYY karyotype, which describes the number and appearance of the chromosomes in a cell, is associated with neurodevelopmental impairments, including symptoms of autism spectrum disorder (ASD).

The 47, XYY condition is the most common of all aneuploidies and has generated much scientific interest given early research, which suggested an association between this karyotype and the likelihood of violent crimes. Later research, which examined the association between violent crime and the condition in larger cohorts, debunked this. Instead, these studies uncovered the stronger correlation between the risk of neurodevelopmental difficulties and the possession of the 47, XYY karyotype.

The hallmarks of Superman Syndrome

A present, the neurodevelopmental phenotype of XYY is associated with a lower-than-average intelligence quotient (IQ), impediments in speech and language, learning difficulties, poor performance in school, difficulties with social interaction, and poor attention span.

The deficit in IQ is quantifiably lowered by 10 points on average, according to studies examining cognitive ability in XYY males. This deficit primarily affects the verbal processing centers in the brain and translates to language delays, and associated language development handicap in birth cohorts (in which XYY is diagnosed at birth) as well as clinical cohorts (diagnosis later in life).

With regard to difficulties in academic performance, XYY individuals find difficulty reading and show poor adaptive functioning. Adaptive functioning describes a person’s ability to function interpersonally in social situations. The challenge faced by XYY is surprising, as social function is not associated with lowered IQ.

The association between XYY and ASD is an area of active research, motivated by observing a notable difference between the ratio of ASD in children possessing the normal 46, XY or XX and those with 47, XYYX. In a recent study, the rate of ASD in males with XYY chromosomes was determined at 14%. Other less prevalent neurodevelopmental conditions associated with XYY include mood and anxiety disorder, oppositional defiance disorder, obsessive-compulsive spectrum disorder, and tic disorder.

The aneuploidy that is associated with XYY arises when a male receives an additional Y chromosome of paternal origin, resulting in a total chromosomal count of 47. The error that leads to this genotype arises from meiotic divisions in which non-disjunction, in which pairs of homologous chromosomes fail to separate during meiosis, the process of sex chromosome formation.

These structural disorders may be visible at the level of the light microscope i.e., cytogenetically visible; in cases where the structural changes are slightly more subtle, these changes are visible at the sub-microscopic level. The most prevalent structural abnormality is a balanced translocation – here, almost all or part of a chromosome is physically attached to another.

These resultant fetuses are generally incapable of survival, can cause recurrent miscarriage. However, several will proceed to term with a number of mental and physical abnormalities.