Gwyneth Paltrow has big feelings about her big kids flying the coop, and all parents of teens can relate. The GOOP founder and Marvel Universe star appeared on The Late Late Show this week and told James Corden just how hard it is to have a half-empty nest.

Paltrow and her ex-husband Chris Martin have two teens, their daughter Apple, 18 (who is totally Paltrow’s twin!), and their son Moses, 16. Paltrow said it’s a “huge change” to have Apple off at college. And while Moses, a junior in high school, will be with mom a little while longer, Corden wondered how she is handling the notion of an impending empty nest.

“Not very well, not very well. I’m going to be coming to Hilary’s house,” she said, turning to her co-guest Hilary Swank who is pregnant with twins.

“Come over,” Swank encouraged, laughing as she added, “There’s plenty to go around.”

Moses is also adjusting to his big sister, who Paltrow said has a “big presence,” not being at home. People always ask him what it’s like to have Apple off at college, and he has a simple answer that got an “Aww!” from the audience: “Quiet.”

During their chat, Paltrow took a moment to thank Corden for his help with Moses as he apparently gave her son a ride home from his dad’s house. 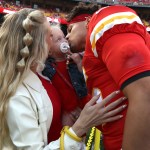 Though they didn’t (sadly), Corden did say they talked about music the whole time. When Moses got out of the car, Corden and his wife Julia Carey turned to each other and agreed that Moses is “the coolest person we’ve ever met.”

“Well he thought you were the coolest Uber driver he’s ever had,” Paltrow said.

As Paltrow prepares to join ranks of celebrity parents with empty nests, we hope she can hold onto her own wisdom and remember that even when her children move out, more good is on the horizon.

“I’ve loved every single stage of their life,” she said. “And every stage I’m like, ‘I wish I could freeze time, I’m never going to love them more than this.’ And then you just love them more.”

These celeb parents have gotten very real about their kids growing up.