File under “stay in your lane, bruh”: Shay Mitchell’s boyfriend Matte Babel wants the pregnant Pretty Little Liars star to forgo an epidural because her body is “genetically engineered” to handle the pain of childbirth.

Fans got an early sneak peek online into the couple’s ongoing disagreement about their birth plan from an upcoming episode of Mitchell’s YouTube series, “Almost Ready.” In the sneak peek, Mitchell suggests that she and Babel need to get on the same page about their birth plan and their differing feelings regarding an epidural. Then Babel babbles about his reasoning for wanting Mitchell to go the natural birth route: “Am I partial to no epidural? Yes. Why? Because I’m a hypochondriac. I’m afraid of drugs. My mom didn’t use an epidural. I meet women all the time who didn’t choose to use an epidural.”

That’s a lot to unpack, but we’ll happily unpack it on Mitchell’s behalf (and on behalf of their baby girl on the way).

Is Babel being asked to get an epidural? Nope.

Does it matter at this second that he’s afraid of drugs? Nope.

Is his mom being forced to get an epidural? Nope.

Are women other than his pregnant girlfriend being asked how they feel about epidurals at this moment in time? Nope.

It seems to us that Babel is thinking of everyone in this moment except for the woman he loves and has knocked up (and who’s also suffered a miscarriage). And we’ve got no patience for that crap. This is Mitchell’s birth, not Babel’s, and he can fuck off with his archaic “genetically engineered” understanding of the female body. Mitchell — almost nine months pregnant — gets to choose. This is all her call, not his. Some things really are black and white.

Fortunately, Mitchell seems like she’s not budging on what she wants, asking him how he’d feel about a root canal without any pain relief — an analogy he scoffs at, as if the pain of childbirth is a desirable pain. Ha! Ha ha!

We’re not sure what she pulls out of the bag at the end of the sneak peek, but we’re really hoping it’s one of those childbirth pain simulators that she can strap around Babel’s belly and zap him with until he cries for mercy. Because, yeah, that’s how we feel about men forcing their opinions about pain management during birth upon the women who are actually doing the birthing. Aaaand we’re pretty sure we’re not the only ones: 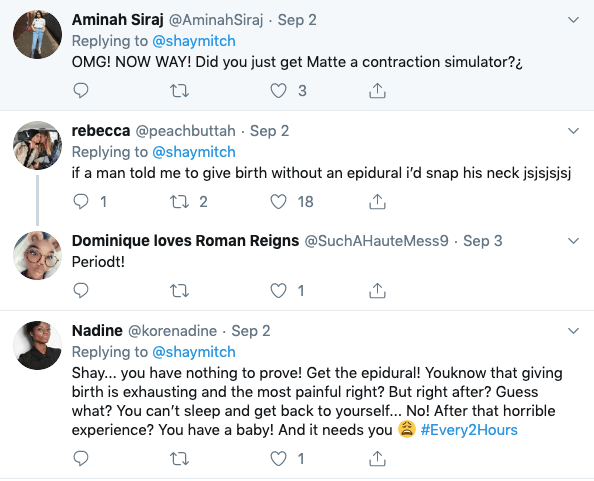 The episode airs later today, Sept. 4 — and oh, you can bet we’ll be watching to see if Babel changes his mind about that epidural.