The royal siblings are growing up. Prince George and Princess Charlotte smiled for the camera ahead of their first day of school together.

“The Duke and Duchess of Cambridge are very pleased to share a photograph of Prince George and Princess Charlotte at Kensington Palace this morning,” Prince William and Duchess Kate captioned a Thursday, September 5, Instagram upload. “The photo was taken shortly before Their Royal Highnesses left for Thomas’s Battersea.”

In the pic, Charlotte, 4, stood with her arm around her older brother, 6. The pair were both rocking big smiles and red and navy blue school uniforms. 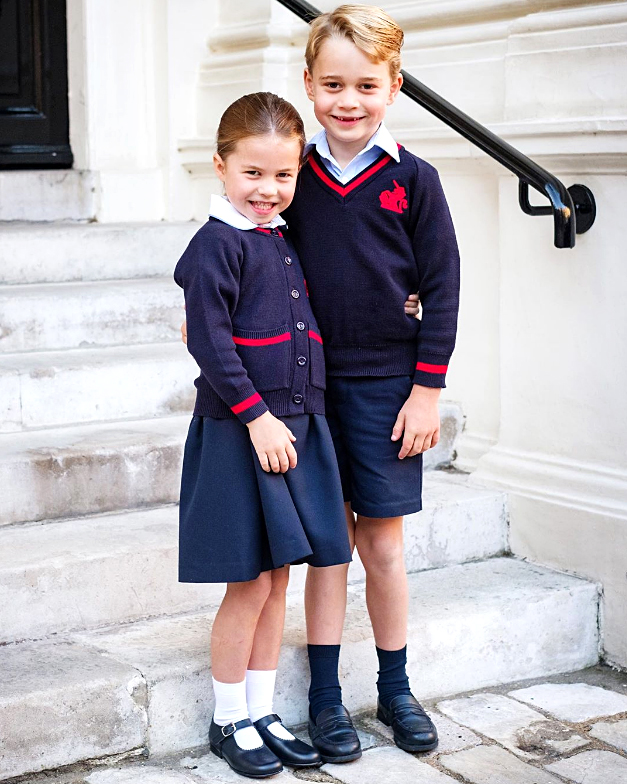 Kensington Palace told Us Weekly in a statement last month that Charlotte would be going to the same school as George. “Princess Charlotte will be attending Thomas’s Battersea starting next Thursday, September 5th,” the statement read. “Kate and William will be by her side for her first day of school. There will be unofficial school portraits from Charlotte and George’s first day.”

A source went on to tell Us that George would be able to show his younger sister around the co-ed institute, which is located in London’s Notting Hill neighborhood. The school is about three miles away from the royal family’s home.

It’s been a big year for Kate and William’s daughter, who rang in her 4th birthday in May. A source told Us exclusively at the time how the little one was celebrating. “[Charlotte] has preschool on the day of her birthday, so it’ll be a birthday breakfast and Kate will walk her there,” the insider said.