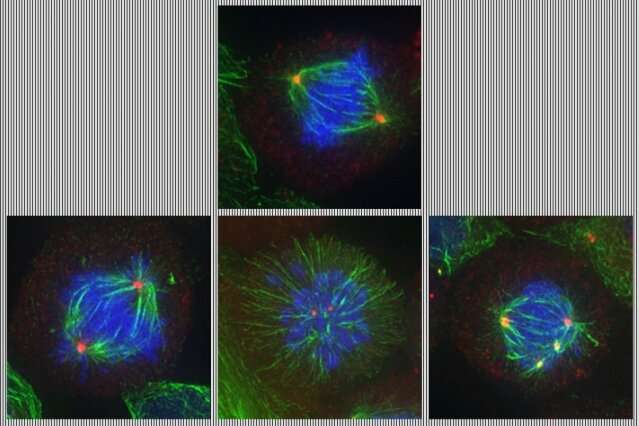 When it comes to killing cancer cells, two drugs are often better than one. Some drug combinations offer a one-two punch that kills cells more effectively, requires lower doses of each drug, and can help to prevent drug resistance.

MIT biologists have now found that by combining two existing classes of drugs, both of which target cancer cells’ ability to divide, they can dramatically boost the drugs’ killing power. This drug combination also appears to largely spare normal cells, because cancer cells divide differently than healthy cells, the researchers say. They hope a clinical trial of this combination can be started within a year or two.

“This is a combination of one class of drugs that a lot of people are already using, with another type of drug that multiple companies have been developing,” says Michael Yaffe, a David H. Koch Professor of Science and the director of the MIT Center for Precision Cancer Medicine. “I think this opens up the possibility of rapid translation of these findings in patients.”

The discovery was enabled by a new software program the researchers developed, which revealed that one of the drugs had a previously unknown mechanism of action that strongly enhances the effect of the other drug.

Yaffe, who is also a member of the Koch Institute for Integrative Cancer Research, is the senior author of the study, which appears in the July 10 issue of Cell Systems. Koch Institute research scientists Jesse Patterson and Brian Joughin are the first authors of the paper.

Yaffe’s lab has a longstanding interest in analyzing cellular pathways that are active in cancer cells, to find how these pathways work together in signaling networks to create disease-specific vulnerabilities that can be targeted with multiple drugs. When the researchers began this study, they were looking for a drug that would amplify the effects of a type of drug known as a PLK1 inhibitor. Several PLK1 inhibitors, which interfere with cell division, have been developed, and some are now in phase 2 clinical trials.

Based on their previous work, the researchers knew that PLK1 inhibitors also produce a type of DNA and protein damage known as oxidation. They hypothesized that pairing PLK1 inhibitors with a drug that prevents cells from repairing oxidative damage could make them work even better.

To explore that possibility, the researchers tested a PLK1 inhibitor along with a drug called TH588, which blocks MTH1, an enzyme that helps cells counteract oxidative damage. This combination worked extremely well against many types of human cancer cells. In some cases, the researchers could use one-tenth of the original doses of each drug, given together, and achieve the same rates of cell death of either drug given on its own.

However, they soon realized that this synergy had nothing to do with oxidative damage. When the researchers treated cancer cells missing the gene for MTH1, which they thought was TH588’s target, they found that the drug combination still killed cancer cells at the same high rates.

“Then we were really stuck, because we had a good combination, but we didn’t know why it worked,” Yaffe says.

To solve the mystery, they developed a new software program that allowed them to identify the cellular networks most affected by the drugs. The researchers tested the drug combination in 29 different types of human cancer cells, then fed the data into the software, which compared the results to gene expression data for those cell lines. This allowed them to discover patterns of gene expression that were linked with higher or lower levels of synergy between the two drugs.

This analysis suggested that both drugs were targeting the mitotic spindle, a structure that forms when chromosomes align in the center of a cell as it prepares to divide. Experiments in the lab confirmed that this was correct. The researchers had already known that PLK1 inhibitors target the mitotic spindle, but they were surprised to see that TH588 affected the same structure.

“This combination that we found was very nonobvious,” Yaffe says. “I would never have given two drugs that both targeted the same process and expected anything better than just additive effects.”

“This is an exciting paper for two reasons,” says David Pellman, associate director for basic science at Dana-Farber/Harvard Cancer Center, who was not involved in the study. “First, Yaffe and colleagues make an important advance for the rational design of drug therapy combinations. Second, if you like scientific mysteries, this is a riveting example of molecular sleuthing. A drug that was thought to act in one way is unmasked to work through an entirely different mechanism.”

The researchers found that while both of the drugs they tested disrupt mitosis, they appear to do so in different ways. TH588 binds to microtubules, which form the mitotic spindle, and slows their assembly. Many similar microtubule inhibitors are already used clinically to treat cancer. The researchers showed that some of those microtubule inhibitors also synergize with PLK1 inhibitors, and they believe those would likely be more readily available for rapid use in patients than TH588, the drug they originally tested.

While the PLK1 protein is involved in multiple aspects of cell division and spindle formation, it’s not known exactly how PLK1 inhibitors interfere with the mitotic spindle to produce this synergy. Yaffe said he suspects they may block a motor protein that is necessary for chromosomes to travel along the spindle.

One potential benefit of this drug combination is that the synergistic effects appear to specifically target cancer cell division and not normal cell division. The researchers believe this could be because cancer cells are forced to rely on alternative strategies for cell division because they often have too many or too few chromosomes, a state known as aneuploidy.

“Based on the work we have done, we propose that this drug combination targets something fundamentally different about the way cancer cells divide, such as altered cell division checkpoints, chromosome number and structure, or other structural differences in cancer cells,” Patterson says.