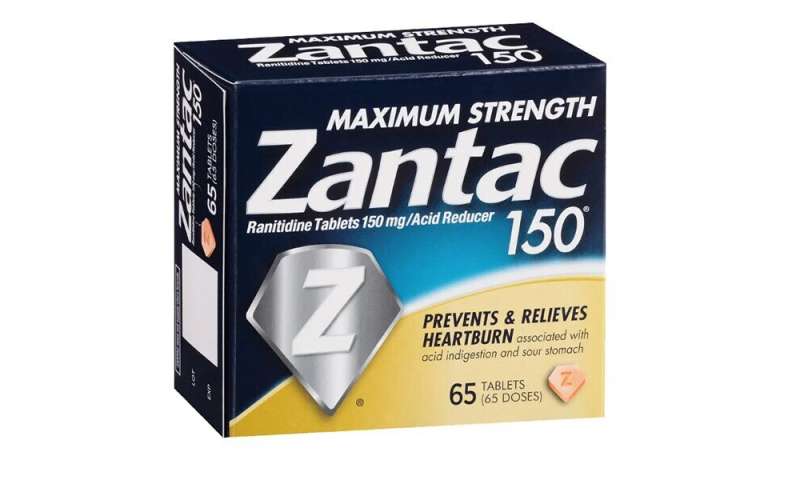 (HealthDay)—A substance that could cause cancer has been found in some ranitidine heartburn and ulcer medicines, including the brand-name drug Zantac, and the source of this contamination is being investigated, the U.S. Food and Drug Administration says.

While preliminary tests found low levels of the nitrosamine impurity N-nitrosodimethylamine (NDMA) in some ranitidine products, the FDA said this does not mean patients taking the drugs should stop using them now.

NDMA is the same contaminant found in many brands of blood pressure and heart failure medicines during the past year, leading to recalls.

Patients who are taking prescription ranitidine and want to stop using it should discuss alternatives with their health care provider, the FDA advised. Those taking over-the-counter (OTC) ranitidine could switch to other OTC medicines.

Several drugs are approved for the same or similar uses, the FDA noted.

NDMA is an environmental contaminant found in water and foods, including meats, dairy products and vegetables. It is classified as a probable human carcinogen.

“Drug impurities remain a major national concern,” said Dr. David Robbins, associate chief of endoscopy at Lenox Hill Hospital in New York City. “While Zantac may prove safe in the long run, this latest statement adds confusion and concern, so my interim advice to patients is simple: switch to another drug … and of course, confirm with your doctor the need for an antacid.”

The FDA said it’s evaluating whether the low levels of NDMA in ranitidine pose a risk to patients and that it will post that information when it’s available.

Sanofi, manufacturer of Zantac, did not respond to a request for comment.

Dr. Janet Woodcock, director of the FDA’s Center for Drug Evaluation and Research, said the FDA is working with international regulators and industry partners to find out where the contamination originated.

“The agency is examining levels of NDMA in ranitidine and evaluating any possible risk to patients,” she said in a news release. “The FDA will take appropriate measures based on the results of the ongoing investigation.”

Large amounts of NDMA may pose a risk, but the levels of NDMA in ranitidine found in preliminary tests barely exceed amounts found in common foods, according to the FDA.

Similar contamination in heart medicines is also under investigation.