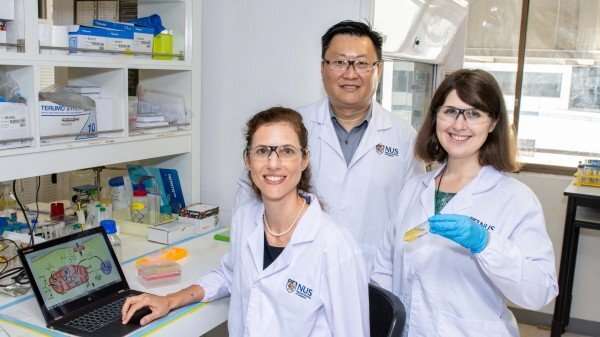 A team of pharmacists and chemists from the National University of Singapore (NUS) has developed a new anti-cancer drug that has less toxic effects to the kidneys. The new drug works like a “magic bullet” that is delivered directly to the mitochondria—the power generators of cells—of cancer cells. Once the drug reaches the tumor, two active molecules—an anti-cancer drug and a sensitizer—are released at once, and they attack the mitochondria, leading to the death of cancer cells. Such a targeted approach reduces the drug’s interactions with other tissues, minimizing side effects and it is expected to lower the risk of patients developing resistance to anti-cancer drugs like cisplatin.

The development of the novel drug was first reported in the journal Angewandte Chemie International Edition on 3 April 2019.

Side effects of anti-cancer drugs

The discovery of cisplatin as an anti-cancer drug in 1965 was an important milestone that changed the treatment of the disease, and improved the cure rates of cancer patients worldwide.

More than 50 years later, cisplatin and the newer generation of platinum-based anti-cancer drugs are still used in about 40 percent of all chemotherapy treatments. However, these drugs have toxic side effects, such as causing severe kidney dysfunction in patients, which may require some patients to undergo dialysis treatment.

“When designing and evaluating new cancer treatments, researchers often use cisplatin as a gold standard to compare new medicines. Cisplatin is known to kill cancer cells by damaging DNA. But cancer cells are smart, and they have ways to repair this damage and become resistant to the drug treatment. Hence, we need good alternatives that can address drug resistance and the associated side effects,” explained Associate Professor Ang Wee Han from the Department of Chemistry at the NUS Faculty of Science.

He worked together with Associate Professor Giorgia Pastorin from the Department of Pharmacy at the NUS Faculty of Science to look into developing an anti-cancer drug with better treatment outcomes to serve as an alternative to cisplatin. The research was conducted in collaboration with Professor Dan Gibson from The Hebrew University of Jerusalem.

Recognising that the mitochondria have less efficient repair mechanisms in their DNA, the NUS team came up with a novel drug that can be delivered directly to them. This was achieved by adding a mitochondria-targeting ligand to the original cisplatin scaffold. This additional ligand has a strong positive charge that displays high affinity towards the complementary negative charge of the mitochondrial membrane.

The NUS researchers examined how their drug was released into the blood, and came up with a method to encapsulate their novel drug formulation in miniaturised drug carriers known as liposomal nanovesicles. As tumors grow very rapidly, their blood vessels do not have time to develop properly and they are leaky. Such an environment enables the permeation of the drug carriers from blood vessels to the tumor microenvironment, and be retained within the tumor to carry out the attack on cancer cells.

Experiments by the researchers showed that the new drug, when delivered in a colon cancer model, shrank the tumor until it became impalpable.

“No sign of kidney inflammation was detected, unlike the use of conventional cisplatin. These results indicate that our invention is a viable alternative to cisplatin,” said Dr. Maria Babak, who was the first author of the study.

“While our results show great potential, we want to further challenge ourselves to improve our drug so that we can achieve complete tumor remission and tackle drug resistance. Accomplishing such a feat will open doors to improving cancer treatment and survival rates,” said Assoc Prof Pastorin.