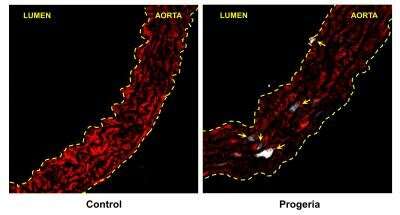 Researchers at the Centro Nacional de Investigaciones Cardiovasculares (CNIC) and the Universidad de Oviedo have discovered a new molecular mechanism involved in the premature development of atherosclerosis in mice with Hutchinson-Gilford progeria syndrome (HGPS). Moreover, the results, published in EMBO Molecular Medicine, identify a potential therapeutic target for this severe genetic disease, which is characterized by the premature onset of cardiovascular disease and early death, usually from a heart attack or stroke, between the ages of 6 and 20 years.

Progeria is very rare genetic disease caused by a mutation in the LMNA gene. The disease affects an estimated 400 people worldwide. HGPS patients show accelerated aging linked to a high risk of cardiovascular disease. In the words of study leader Vicente Andrés, studying this disease “brings us closer to a possible treatment for disease victims and can provide important information about normal physiological aging and the factors that regulate it.”

Atherosclerosis is a degenerative disease in which cholesterol and immune cells accumulate in the blood vessel walls, forming plaques or plugs that obstruct blood flow. Rupture of atherosclerotic plaques can trigger a life threatening myocardial infarction or stroke. Many of the factors that increase the risk of atherosclerotic cardiovascular disease can be controlled by changes to lifestyle, including a healthy diet, physical activity, and stopping smoking, as well as medical treatment. However, the main risk factor is aging, which cannot be modified. This situation is aggravated in progeria patients, whose arteries have multiple defects, including loss of smooth muscle cells and the formation of atherosclerotic plaques.

The new study was co-directed by Vicente Andrés of the CNIC and the Centro de Investigación en Red en Enfermedades Cardiovasculares (CIBERCV) and Carlos López Otín of the Universidad de Oviedo. The study identifies a molecular mechanism involved in the accelerated development of atherosclerosis in progeria. In addition, the results suggest a possible pharmacological treatment that slows the progression of atherosclerosis and extends the lifespan of progeroid mice.

Little is known about the mechanisms underlying early vascular disease in progeria because there are so few patients and because animal models of this disease have not developed atherosclerosis. Vicente Andrés’ group recently generated the first mouse model that recapitulates the accelerated atherosclerosis in HGPS induced by the protein progerin. The results of the analysis of these mice, published in 2018 in Circulation, identified vascular smooth muscle cells as a possible target for the treatment of premature atherosclerosis in progeria.

The EMBO Molecular Medicine study, featured in an editorial in the journal, shows for the first time that “stress in the endoplasmic reticulum (ER stress) and the associated unfolded protein response (UPR) are involved in the death of vascular smooth muscle cells in progeroid mice,” explains first author Magda Hamczyk. “We therefore think that treatments targeting these cellular stress pathways could be effective against vascular disease in progeria.”

The research team used the compound tauroursodeoxycholic acid (TUDCA), which reduces the negative consequences of the activation of the ER stress and UPR pathways. According to Vicente Andrés, “treatment of progeroid mice with TUDCA inhibits the progression of vascular disease, including vascular smooth cell loss and atherosclerosis. TUDCA also prolonged the lifespan of progeroid mice, which die from the complications of atherosclerosis”.