Bladder cancer develops most commonly in the urothelial lining of the bladder. According GLOBOCAN database 2012, it is the 9th most common type of cancer worldwide, with 430,000 newly diagnosed cases in 2012.

What is Bladder Cancer? 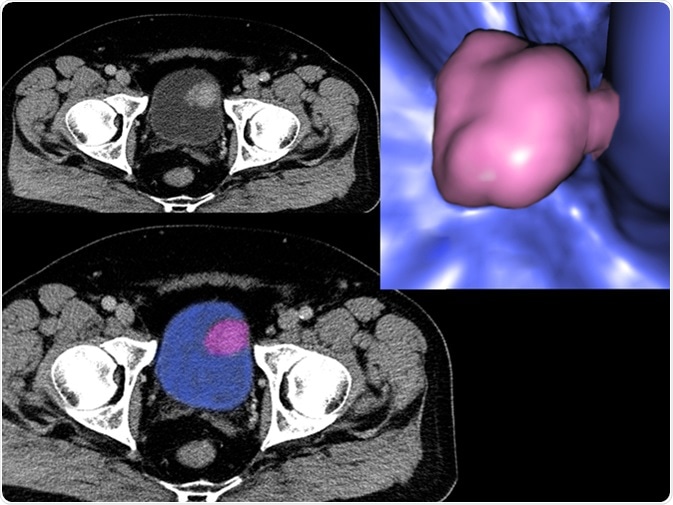 Stages and Grades of Bladder Cancer

Bladder cancers are categorized into different stages based on their invasiveness. Lesions that are restricted to the urothelium and do not invade any other muscle layer are grouped as non-muscle invasive bladder cancer (NMIBC). Carcinoma in situ or stage Tis, stage Ta (tumors of the mucosa), and stage T1 (tumors that invade the lamina propria) are included in NMIBC. In contrast to NMIBC, tumors that invade bladder wall muscle (stage T2), perivesical fat layer (stage T3), and nearby organs (stage T4) are grouped as MIBC.

Although the exact pathophysiology of bladder cancer is not known, mutations in genes that regulate important cellular events, such as cell division, growth, and survival, are significantly associated with the development of bladder cancer. These mutations are mostly somatic in nature, meaning that they are not inherited, rather, they are acquired during a person’s lifetime.

Genes that are found to be significantly mutated in bladder cancer include:

Epidermal growth factor receptor 2 (HER2) – this gene encodes a tyrosine kinase called HER2. Overexpression of HER2 is mostly found in high grade bladder cancers and is associated with an increased risk of tumor recurrence.

HRAS – this oncogene encodes a small GTPase protein called H-RAS, which is a member of the RAS superfamily. H-RAS acts by hydrolyzing GTP into GDP and primarily regulates cell growth. In some cases of bladder cancer, somatic mutation (gly12val) in HRAS gene leads to the formation of a constitutively active HRAS protein, which subsequently triggers rapid cell proliferation and induces tumor development. This mutation is also associated with bladder cancer progression, and thus, increases the risk of tumor relapse after treatment.

RB1 – this gene encodes a cell cycle regulator called pRB, which acts as a tumor suppressor by maintaining a tight control between cell division and DNA replication. This protein also regulates cell survival, apoptosis, and differentiation. Somatic mutation in RB1 gene, which makes this gene inactive, has been found in some cases of bladder cancer. Inactivation of RB1 gene downregulates the expression pRB protein and subsequently causes an abnormal cell growth and tumor formation.
TP53 – this gene encodes another cell cycle regulator called p53, which acts as a tumor suppressor. Upon DNA damage, p53 initiates cell cycle arrest and directs damaged cells to either DNA damage repair pathways or apoptotic pathways. Somatic mutation in TP53 gene is associated with bladder cancer development and progression.

Telomerase reverse transcriptase (TERT) – mutation in this gene has been found in 70% of bladder cancer cases. Protein encoded by this gene is known to be associated with DNA repair, aging process, and cancer development.