Any tropical skin infection or infestation can present as a primary condition or a secondary manifestation of disease elsewhere in the body. Some examples of the former are Madura foot, simple cutaneous leishmaniasis and cutaneous larva migrans, while the latter encompass systemic conditions such as leprosy, kala-azar and coccidioidomycosis.

Cutaneous infections are commonly found in returning travelers, as well as in immigrants from tropical countries. Their delayed diagnosis is common, as they often represent a challenge for clinicians in the industrialized world. Therefore a thorough history-taking that leads to establishing a morphological and topographical diagnosis is warranted.

Leishmaniasis is a disease endemic in approximately hundred countries (with 350 million people constantly at risk) and caused by protozoan organisms of the genus Leishmania transmitted to humans by the bite of infected female sandflies. Most Leishmania spp. can cause skin or mucocutaneous disease, with 1.5 million new cases of cutaneous leishmaniasis occurring every year. 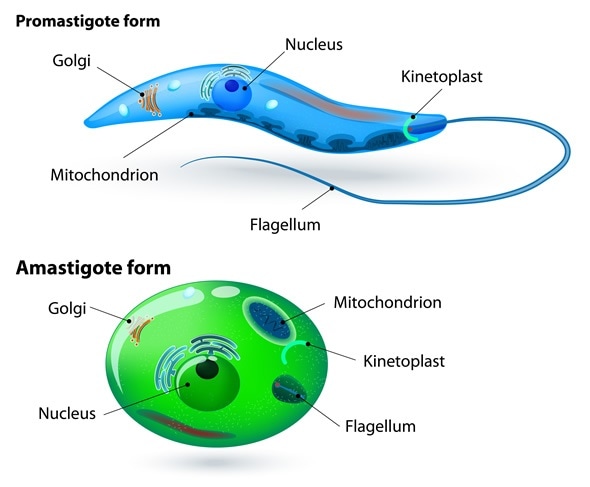 The bite of a sandfly induces an inflammatory nodular or papular lesion that slowly progresses for several weeks. Approximately 6-8 weeks after the bite a violaceous nodule starts to get bigger and an ulcer covered by a thick crust develops. Advanced late forms present with scarring, skin atrophy and pigmentary changes.

A particular localized form known as “chiclero ulcer” affects the helix of one ear and is caused by Leishmania braziliensis or Leishmania mexicana. Post-kala-azar dermal leishmaniasis is a form of the disease where pigmented and hyperkeratotic lesions are seen on the body surface.

Cutaneous larva migrans is dermatosis that results from the accidental penetration of the skin by parasitic larvae from domestic bovine, canine and feline hosts. A close contact with human skin enables the infective larvae (which are developed in the soil from ova passed in the stool) to burrow into the epidermis and cause clinical disease.

Principal etiologic agents are Ancylostoma braziliense, Ancylostoma ceylanicum, Ancylostoma caninum and Uncinaria stenocephala, but a plethora of other species can be implicated as well. Albeit it is considered a self-limiting disease, the skin pathology can persist for months if not treated swiftly.

Main anatomical site affected by cutaneous larva migrans is the plantar region of one or both feet, where a pruriginous papule forms at the site of penetration within one day. An elevated, serpiginous and erythematous larval track starts progressing in a curved fashion, while at the same time itching becomes more and more intense (often resulting in excoriations due to scratching).

Some dipteran species in larval stages (maggots) have the ability to colonize human skin via direct deposition of eggs, contamination by soil, using insects as vectors or by actual penetration into the skin – causing a disease known as myiasis. In the tropical region Dermatobia (human botfly) and Cordylobia (tumbu fly) are genera that are most commonly encountered.

Myiasis presents as a tender lesion similar to boil which starts as a papule and subsequently enlarges into a nodule. Central punctum that enables larva to breathe is observed, and occasional movement of the larva can be noticed by an infected individual. In some instances clinical appearance akin to cutaneous larva migrans is reported.

Tungiasis represents a localized skin disease caused by the burrowing flea Tunga penetrans that usually affects one foot. This flea penetrates the soft skin on the toe-web spaces, although other areas of the foot can be affected. The diagnosis is established clinically by considering the dynamic nature of the lesion morphology.

First stage of tungiasis is characterized by a small reddish spot approximately 1 millimeter in size. One to two days after penetration a growing whitish nodule develops, while in stage three (up to three weeks after penetration) a glass-like white patch that has well-defined borders and a central black dot is observed (often associated with hyperkeratosis).