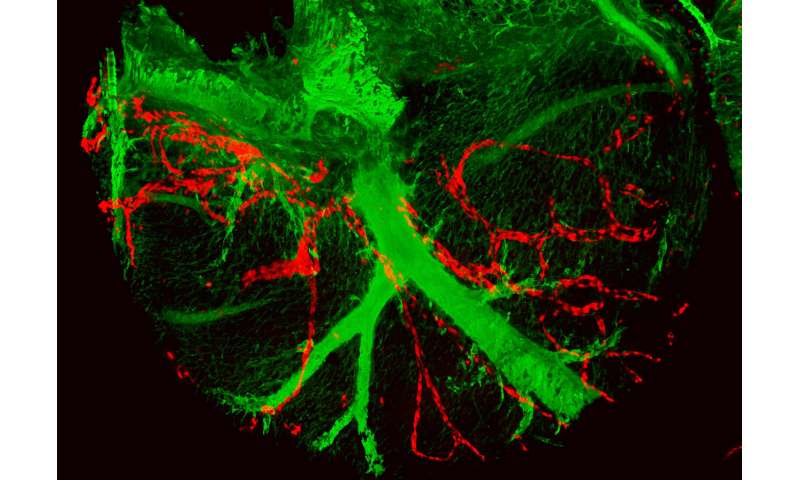 An international study led by Drs Miguel Torres and Ghislaine Lioux of the Centro Nacional de Investigaciones Cardiovasculares (CNIC), has identified and characterized a new vasculogenic niche that contributes to the development of the cardiac lymphatic system. The study shows that the coronary lymphatic vessels have varied origins and functions: The results of the study reveal that the coronary lymphatic vasculature does not have a single origin, but instead forms through the participation of cells from different tissues.

The study, published today in Developmental Cell, opens the way to future research into the mechanism underlying lymphatic vasculogenesis in this new niche and the functional diversity of coronary lymphatics.

Coronary circulation, essential for heart function, is not only composed of the arteriovenous system that provides oxygen and nutrients, but also includes lymphatic vessels. The essential functions of the cardiac lymphatic vessels include protecting the heart against infection, preventing edema (fluid retention) in the myocardium, and the recovery of cardiac function after an infarction. Despite its importance, the coronary lymphatic vasculature is little understood and has received much less attention than the coronary arteries and veins.

This international study was led by Dr. Miguel Torres’s group at the CNIC in partnership with Dr. Guillermo Oliver’s group at the University of Chicago, Dr. Robert Kelly at the University of Marseilles, and Dr. Sagrario Ortega at the Centro Nacional de Investigaciones Oncológicas (CNIO). The study examines the origin of the coronary lymphatic system during the formation of the heart in the mouse embryo.

Until now, explained Dr. Torres, all lymphatic vessels were believed to develop from cells derived from the major veins of the early embryo, from where they migrate to colonize all the tissues and organs in the embryo. 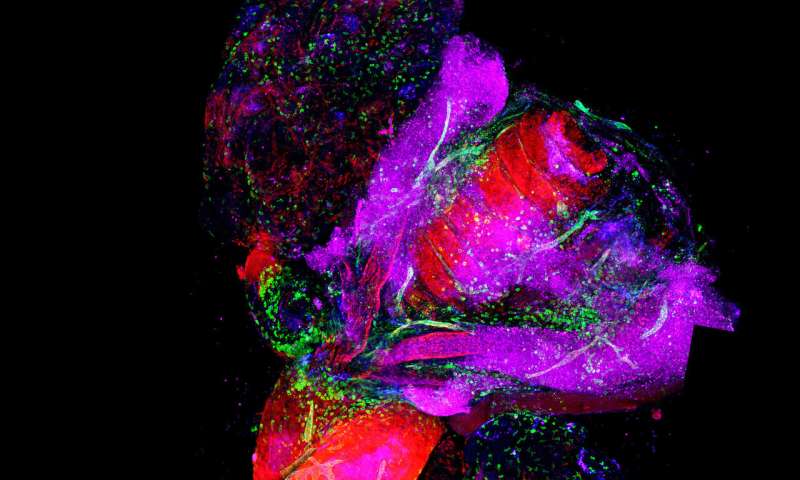 The new study shows that, in the heart, there is a second population of lymphatic cells that is recruited later during development and is derived not from veins, but from a region called the second heart field.

The second heart field, explained Ghislaine Lioux, is composed of multipotent cells “able to generate different types of heart cells, including cardiomyocytes (the cells of the cardiac muscle), smooth muscle cells, and the endothelial cells of the arteries and veins.”

The study shows that the repertoire of cells generated by the second heart field is wider than previously thought and also includes the lymphatic endothelium. According to Dr. Torres “this unique feature of the coronary lymphatic vasculature opens up several interesting avenues for future research.”

One of the more surprising findings was that lymphatic cells generated in the second heart field mix with lymphatic cells with a different, likely venous, origin; the two populations together form the lymphatic vessels in the ventral part of the heart.

Although the second heart field contributes only 50 percent of the cells of the lymphatic vessels, blockade of their formation completely prevented the formation of the coronary lymphatic vasculature.