Cardiopulmonary resuscitation (CPR) may be required whenever a baby stops breathing or the heart stops beating. It is a procedure of supplying oxygen through the lungs and blood flow through the heart until medical care is administered or until a cessation is indicated.

CPR may be needed in many situations, such as following a rescue of a baby from drowning, choking, severe hemorrhage, or suffocation. Electrocution, head trauma, poisoning are other conditions in which a baby may need CPR.

Permanent brain damage and death could occur within four and six minutes of brain oxygen deprivation, respectively; however, such detrimental outcomes can be prevented by CPR. Thus, it is  a vital step in emergency care for a baby who has an undamaged brain and has the potential to fully recover brain function once the critical need is overcome. CPR should be given by a trained person. 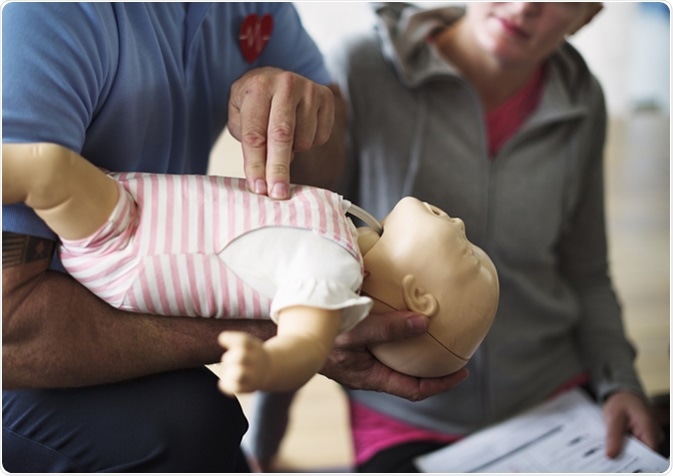 In case of babies, CPR should be given for 2 minutes initially, and then the emergency number should be called.

First the breathing, pulse, and consciousness level should be checked. If these are absent, baby should be shook very gently to look for some noise or movement.

If negative, emergency number should be dialed immediately so that an automated external defibrillator (AED), a machine to restart the heartbeat, can be administered rapidly. In the mean time, CPR should be performed by trained person for two minutes.

In modern CPR, chest compression is the most important and early step before securing a patent airway for breathing or establishing a heartbeat. This is done with two fingers placed on the lower third (not the end) of the sternum, marked by the location just below the baby’s nipples. Infant’s head is tilted back gently with the other hand. The chest is compressed to a third or a half of the way down to the spine behind for 30 times in a quick succession, only allowing the chest to rise completely in between two compressions.

For slightly older or bigger babies, the heel of the hand is preferred to allow sufficient compression. Sometimes both hands are interlocked to give more force during CPR administration. Hands are positioned vertically over the sternum. The point of compression should be the breastbone, about an inch above the bottom to avoid compressing the stomach. The fingers should not be included in the pressure to avoid injuries to the ribs.

At the end of 30 compressions, the bony chin is elevated using a hand (avoid pressing the soft tissue behind the bone, which may block the mouth, or lead to the mouth closing), while the head is tilted up with a hand on the forehead to straighten the airway. The child is observed for any evidence of breathing for not more than 10 seconds or so. Placing the ear near the infant’s nose and mouth to look for any chest movement and placing the cheek near the infant’s mouth and nose to check for breathing are commonly taught methods. It is important to note that irregular gasps are not normal breathing.

If no breath is felt or seen, the mouth and nose are checked for obvious blockage. Afterward, nose is closed and mouth is covered by the performer’s mouth to make a seal. Five rescue breaths are given over one second each, adequate to produce a rise in the chest. This is followed by chest compressions again.

If there is no sign of recovery after two minutes of this combined procedure, calling emergency number is a must to do.

The procedure is continued until medical help arrives, or the baby begins to breathe spontaneously. Every few minutes, the breathing is checked after stopping the procedure. Once the infant coughs or breathes or moves normally, CPR must be stopped immediately. The baby is then turned on to the side if possible and normal breathing is rechecked.