Whether you’ve seen the movie North Shore, follow waterman legend Laird Hamilton, or just love breath-taking beach getaways, you might know Hawaii’s North Shore for its monstrous waves and epic surfing conditions during the winter months (which, mind you, means 80 degrees and sunny there).

It’s also the home of Pipeline, also known as Pipe, a surf reef break off Ehukai Beach Park where the Volcom Pipe Pro surf competition takes place. When Red Bull invited me out to catch the action for myself and try my hand at surfing, I was definitely up for the workout challenge. Catching a wave itself doesn’t burn a ton of calories, but paddling out, then popping up and balancing on the board recruits muscles in your arms, legs, and core.

It was only once I got to Turtle Bay Resort that I first had a glimpse at the ocean. When they say the waves are big in the North Shore, they’re not kidding. Even just at the resort’s beach, the waves topped anything I’d seen in New York, LA, Washington.

If you’ve seen Blue Crush, you may remember the scene where Kate Bosworth and Michelle Rodriguez are running with a rock along the bottom of the ocean. It’s called rock running, and surfers do it in real life to help with breath training, cardio, and to work on being calm while stuck underwater. It’s a form of hypoxic training, when you force your body to perform even when ample oxygen isn’t available. They also use it for cardio endurance training.

Naturally, I had to try it. Accompanied by surf photographer Zak Noyle, I grabbed a face mask and made my way into the ocean at Makapu’u Beach. The waves were no joke — getting past the break proved to be even harder than we thought — and this was sans surfboard.

Before I went down, Noyle explained how it would work. Surf videographer Ryan Moss, who came out to help, would go down to the ocean floor with me and hand me the 50-or-so-pound rock. I was to take it, hug it in tight to my body, and then start to move with it. Sounds easy right? Not quite. Despite the fact that you’re in water, that rock is still heavy. When I didn’t hug it into my chest as instructed, it overpowered me, pulling me to my knees before I even knew it. 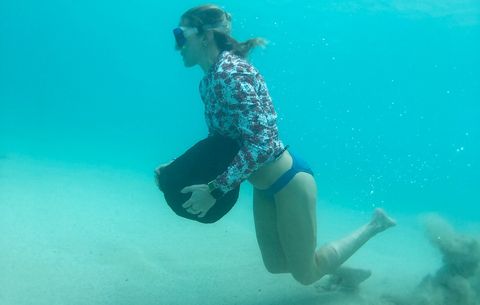 After a couple of attempts that ended with the rock pulling me down to my knees, I slowed down, pulled the rock in tight, and sprinted forward as long as I could before dropping the rock and kicking off the ocean floor to shoot back up to the surface. By sprinted forward, I really mean ran in slow motion; the resistance from the water on all sides doesn’t really allow for sprinting, but it does force you to use all the muscles in your legs to remain standing and move forward. 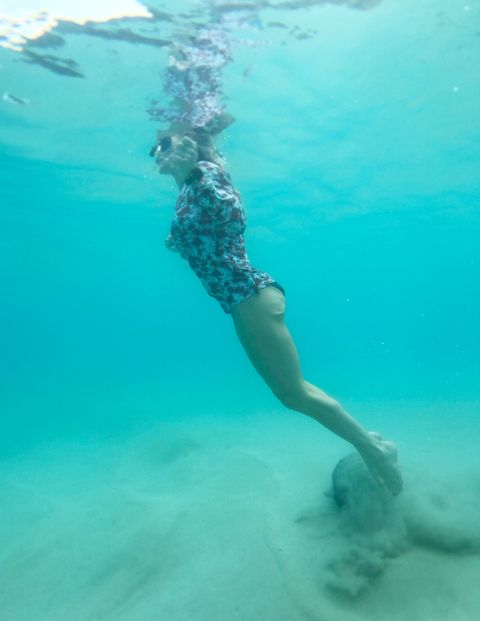 I signed up for a lesson at Hans Hedemann Surf School located in the Turtle Bay Resort. My two instructors explained the steps I’d learn on land and then take out to the waves. I began by lying on the board, feet almost touching the end, chest over the middle, arms out to the side, paddling. When a good wave would come, my instructors would say paddle, and I was to take off as fast as I could using my arms. The next cue would be “pop up,” which told me to grab the sides of the board and use my arms to pop up onto my feet, then immediately jump into a sideways split stance. Once on the board, the goal was to stay low, similar to a squat position, without completely stiffening in the legs. The more precise yet malleable I could be, the better chance I had of staying on the board. Got it? Great. Now it was time to paddle out. 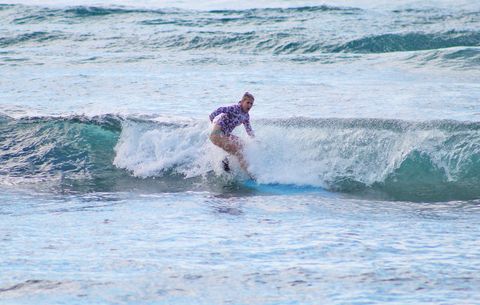 While waiting to get up, I learned that you always face the waves. The ocean is the boss out there, and you don’t want to be taken off guard by a wave you don’t see coming. When it was my turn to catch a wave, I turned the board around the face the shore — which is only okay once you’re ready to surf — and waited for the instructor’s directions. When I finally popped up, I managed to stay low — though I could have gotten even lower — and land both feet on the board. Just like that, I was surfing! 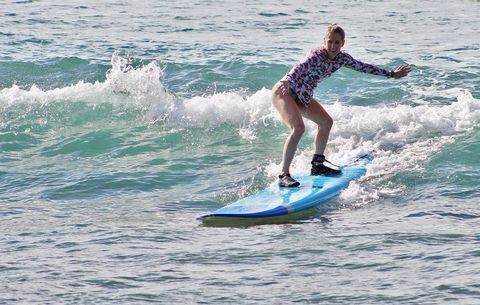 The timing of the pop-up was harder than the balancing aspect. If I ever went too early or too late, or if my feet landed too far back on the board, a nosedive soon followed and I ended up in the ocean. I was grateful the water was shallow and there wasn’t any reef to crash into. All that falling didn’t mean any injury to the body — just the ego.

I got up a handful of times before I was ready to call it quits. Surfing takes a lot out of you — I wore my Apple Watch the whole time, and I burned almost 400 calories in 45 minutes. I was tired, but so glad I said yes to this adventure.