Campylobacteriosis is the term used to refer to the group of infectious foodborne diseases caused by several species of Campylobacter. 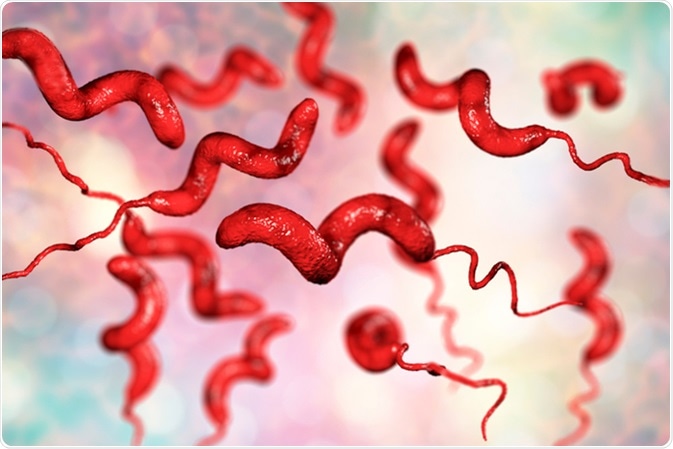 These are Gram negative curved pathogens. It is found in most countries of the world and is transmitted from poultry and cattle meat or milk, which in turn is infected by contact with birds. Raw/undercooked/unpasteurized infected milk and meat or drinking water is responsible for human infection, but contact with animals around the house and farm, especially with puppies, may also cause infection to spread. Hygienic food handling is paramount in preventing campylobacteriosis. These organisms are quickly inactivated by heating the contaminated food, but not by freezing.

While Campylobacters have been recognized to cause animal disease from 1909, it was only in 1980 that human infection was described. Over the last decade the number of human cases has shot up by 14% principally by contaminated poultry meat, and the EU member states may have anywhere from 2-20 million cases annually.

Several different strains are known to cause human disease, mainly C. jejuni and C. coli. Campylobacters have flagella and adherence factors, which enable them to stick to the intestinal mucosa. This in turn promotes small bowel colonization followed by migration to the colon, which is their primary location. Invasion of the bowel wall is facilitated by toxin production, which reduces intestinal absorption. The bacterium resists destruction by gastric acids and bile salts to reach the jejunum and beyond.

The risk of spread of infection varies greatly between abattoirs, and with age, season, time of day when the meat is slaughtered and processed, and the performance of flock depopulation. Host immunity, socioeconomic status, and travel are also important factors.

The indiscriminate use of antibiotics in livestock husbandry to enhance profitable animal growth and prevent or control infections is now being increasingly recognized as a key factor in the emergence of antibiotic-resistant Campylobacter strains.

Campylobacteriosis is associated with the following diseases and post-infectious sequelae or complications:

Post-infectious sequelae also include the following:

Most patients recover spontaneously and require only replacement of fluid and electrolytes. Antibiotics may be required in severe infection, chiefly macrolides, tetracyclines and fluoroquinolones, but resistance is rapidly emerging, and may require stronger antibiotics.