The best we can do is raise a child who learns the basics of secularism the way they should, by being out there, by celebrating all sorts of festivals, by gorging on sewaiyaan at Eid and kadha parshad at the Gurudwara. 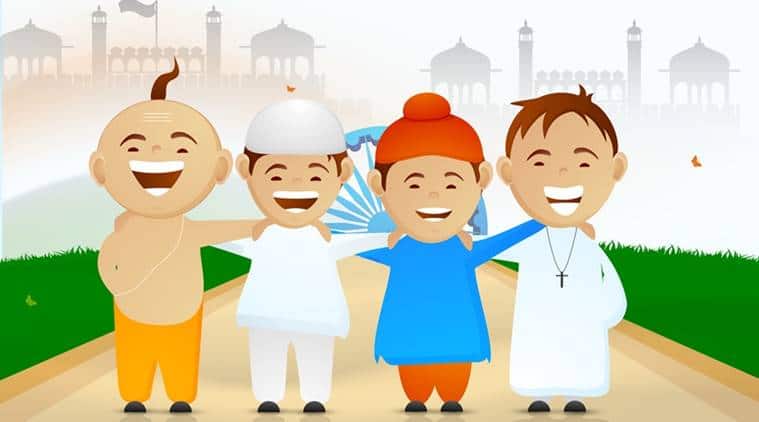 Last week, on Basant Panchami, the husband and I found ourselves at the Nizamuddin Dargah yet again. The place was decorated in yellow and the fragrance of marigold lifted the spirit. Soon, the ceremony started with the head priest relating the story behind Basant Panchami, primarily a Hindu festival finding its way to the Dargah. The Dargah was named after the Sufi saint Hazrat Nizamuddin Auliya. The story goes that Hazrat Nizamuddin was deeply saddened by the demise of his sister’s son and grieved over it for a long period of time. His follower Amir Khusro longed to see him smile again. One day, somewhere near the Dargah, Khusro saw a couple of women dressed in yellow, singing, carrying mustard flowers. They looked happy and this got Khusro curious. The women told him that they were going to the temple to offer the flowers to their god. He innocently asked them if it would make their god happy. The women said it would. An idea brewed in Khusro’s head and he dressed up in a yellow saree, took some mustard flowers, and went in front Hazrat Nizamuddin Auliya singing the Purbi song he had heard the womenfolk sing, ‘sakal ban phook rahi sarson’. The saint finally smiled and the tradition stuck.

The festival found its way in out of sheer love. There are no religious barriers. Even today, people from all faiths come together to celebrate Basant Panchami at the dargah. As we stood there, mesmerised by the music, the words, the flower petals being thrown, the fragrance and a general feeling of oneness, Syed Bilal Ali Nizami (Bilal bhai for short), Gaddi Nashin & Chairman Chishty Nizami Welfare Trust Dargah Hazrat Nizamuddin Aulia, who had generously offered to show us around and made us feel at home, said, ‘this is what Ganga Jamuni tehzeeb is. The Sufi dargahs stand for love, compassion, humanity. Not for any one religion. Not for any one caste or sect. For us all living things are valuable.’ The head priest rounded up his speech with a message to the world that those who feel they can break us, need to come here and see what true India is. From Hindi, Urdu, Purbi to Kabir’s couplets – everything found its way in the qawwalis that followed.

Little kids accompanied their parents and were equally enthralled. Some found the flowers fascinating, some the revelry. The important part was that they were there. They were experiencing something outside their own religion. This one experience simplified secularism like no other text could. We spend endless hours debating about merits of being an atheist online, or the need to teach relevant texts to kids to promote secularism when all we need to do is make experiences like these a part of their life. Secularism cannot be taught in the four walls of a classroom, neither can it be engrained with a simple discourse by a parent. Secularism needs to be felt in every grain of our body if we are to survive as a society.

Bilal Bhai very succinctly put, “We don’t know what to do with all this CAA jargon. We just know that Hazrat Nizamuddin spread the message of love irrespective of religious beliefs. Today we celebrate all festivals here with all people. The evening Dua is a prayer for all present and the world in general. Even for the ones who oppress.”

To be secular, one doesn’t have to have a religious belief. I am a Hindu by birth but lean more towards spiritualism that finds itself in a myriad of places and states of being.

Places like the Nizamuddin dargah, books like Nayanika Mahtani’s Across the Line, music that blurs the lines, a tear shed on atrocities being committed in the name of religion — everything goes into raising a secular, empathetic child. As a parent we owe it to the next generation to undo the damage in whatever way we can. All of us cannot be out on the streets because of a thousand reasons, even if the reason is plain fear. But the best we can do is raise a child who learns the basics of secularism the way they should, by being out there, by celebrating all sorts of festivals, by gorging on sewaiyaan at Eid and kadha parshad at the Gurudwara. My atheist friends would kill me but think about it. Secularism is about treating everyone the same despite their beliefs. So I might not believe in God, but I respect your beliefs and also would love to be a part of your celebrations. Is that not what the world needs? As a parent, if we are able to offer the experience of the Ganga Jamuni Tehzeeb to our children, most of our work would be done. They will themselves carry the torch of love in to future.

The Qawwali has shifted to a smaller courtyard and the Nizami brothers are now singing about their love for Auliya, for people present and the humanity at large. There is a pause. They wait for the Azaan to get over at a nearby mosque before resuming. No one complained or whined. Everyone sat in silence. In peace. This is the tehzeeb we need to learn. This is the tehzeeb we need to pass on.

(The writer has a PhD in Positive Psychology and is a lecturer in psychology. She is also the author of the book Keep Calm and Mommy On. Views are personal. Listen to Season 1 and 2 of Tanu Shree Singh’s podcast Difficult Conversations With Your Kids.)