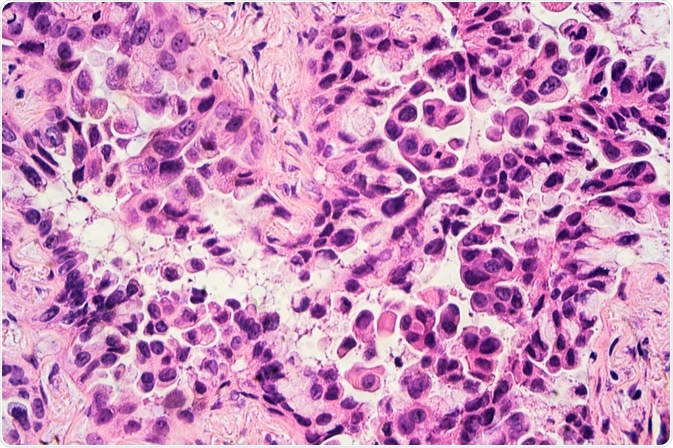 An overview of NSCLC

Non-small cell lung cancer (NSCLC) can be further categorized into several different types, the most common of which include adenocarcinoma, squamous cell carcinoma (SCC), and large cell carcinoma. Other less common types of NSCLC include adenosquamous, pleomorphic, spindle cell, and giant cell carcinomas, as well as pulmonary blastoma, neuroendocrine tumors, and several others.

Recent advancements in molecular biology, particularly due to the discovery of epidermal growth factor (EGFR) mutations and anaplastic lymphoma kinase (ALK) rearrangements, have drastically changed how these NSCLC subtypes are treated. These discoveries have led to the development of EGFR tyrosine kinase inhibitors and ALK inhibitors, both of which are highly effective treatment options for patients with these specific histologic types of lung cancer.

It is estimated that adenocarcinomas comprise approximately 40% of all lung cancers. By definition, adenocarcinoma in the lung is a malignant epithelial neoplasm that can be accompanied by either glandular differentiation or the production of mucin. Typically, an adenocarcinoma will form a peripherally located mass that exhibits both central fibrosis and pleural puckering.

Other gross appearances that can be associated with an adenocarcinoma diagnosis include a centrally located mass, diffuse lobar consolidation, multiple lobes distributed bilaterally, and pleural thickening.

Approximately 20% of all lung cancers are SCC, which can be present in various places throughout the lungs, the most common of which include the central portion, along major airways and in the form of cavities when present in larger sizes.

The establishment of an SCC diagnosis plays a determining role in which chemotherapeutic agents are not only ideal in reducing the cancer burden but can also avoid certain life-threatening complications. The use of a vascular endothelial growth factor inhibitor in the treatment of SCC, for example, can increase the likelihood of a pulmonary hemorrhage, thereby indicating the need to avoid this type of drug.

Notably, patients with SCC often have a better survival rate as compared to those diagnosed with adenocarcinoma.

Recent reports by the World Health Organization (WHO) have found that large cell carcinomas are a heterogeneous group of tumors that can be made up of adenocarcinoma, squamous cell differentiation, or a null immunophenotype and genotype. 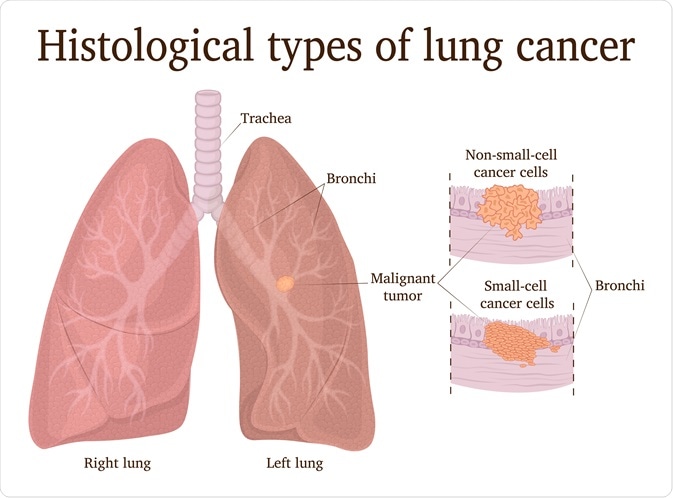 An overview of SCLC

Over the past twenty years, the incidence of SCLC has decreased, which is most likely related to the global reduction in tobacco use. It is estimated that at least 95% of patients diagnosed with SCLC have a positive smoking history; however, individuals who quit smoking not only have a reduced incidence of the disease but also have a 50% chance of reduced mortality when this type of lung cancer is diagnosed in its early stages.

In addition to a history of smoking, other environmental and occupational hazards that have been associated with causing SCLC to include exposure to chloromethyl ether, which is a chemical that can be used in various industrial settings, as well as high radon levels, which is particularly a concern for uranium miners.

Although SCLC only comprises about 15% of all lung cancer diagnoses, this form of lung cancer is highly aggressive. In addition, since many patients with SCLC also have multiple comorbidities due to previous tobacco use, which can include chronic obstructive pulmonary disease (COPD), ischemic cardiopathy, and hypertension, treatment for this type of lung cancer can be highly complicated.

Whereas patients with limited disease (LD) type of SCLC is often treated with concomitant chemoradiation, those with the extensive disease (ED) type are instead treated with palliative chemotherapy. Many patients with SCLC will respond well to initial treatment; however, it is common for patients with the resistant disease to relapse.

In the event that the cancer relapses, the median survival is typically in the range of 4 to 5 months when second- or third-line chemotherapy is used.